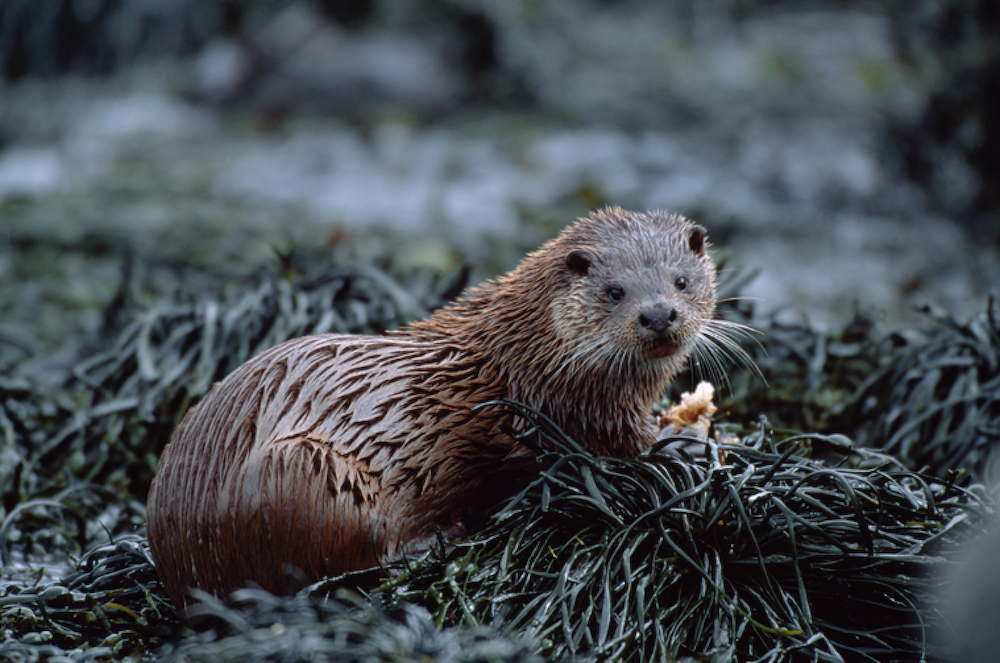 I have my binoculars firmly focussed on a cut of silver in the still water which is moving down the firth. The head of a one year old dog otter (Lutra lutra) appears, then turns on its back and proceeds to relish a tasty eel after a successful hunting dive. He makes his way closer to the shore, just 15 metres away from where I sit, watching with bated breath. Entranced, I spent the whole morning tracking this secretive mammal, as he fishes the shoreline.

The morning was perfect for otter watching; the water still, clear and quiet. The only disturbances were lone common seals curiously bobbing in the tide, looking form side to side; a curlew, alarmed by my presence; and chattering skeins of pink-footed geese passing above.

Watching where I’d found him sleeping the day before, I was delighted to find him once again, dozing in the crisp morning sun on a small boat near to shore. Once awake, he slipped into the water, making his way down the firth on his morning foraging routine. Local intelligence is priceless, and I was lucky to have met a fellow otter enthusiast who kindly shared his knowledge. Together we crept along the shoreline, watching as our otter swam back and forth with catches. Otters have acute hearing, smell, and eyesight. These three sense organs are placed near the top of its head, allowing it to break the surface, assess its surroundings, and dive down before you’ve realised he was there. However, away form the safety of the water, it is a more nervous creature. I eagerly watched as this otter slipped up the pebbles and into the darkness of its holt.

I spent the next hours tracking his movements back to where I had first spotted him the previous day, trying to stealthily follow him along the shoreline whilst attempting to keep up with his pace (an otter can swim at 12km/hour). If you lose visual contact, a swimming and diving otter can be hard to locate in a vast water body and they are very good at disappearing. Typical signs to look for are a silver v-shaped wake in the water or a bobbing head. From afar, seals can be misleading, but a swimming otter typically protrudes three bumps from the water: head, back, and tail. As the tide receded, the otter left spraint on a newly emerged rock. Spraint is an otter’s means of communication – to mark their territory and display their fitness and quality to other otters. I sat, transfixed, just 20 metres away, hiding in grassy tufts.

I had never seen an otter before moving to the Highlands. Their population is still recovering in England and Wales since the rapid population decline in the 1950s to 1980s largely due to the runoff of pesticides from agriculture, which bio-accumulated up the food chain, poisoning top predators. Otters living in the sea (not ‘sea otters’ which are a different species found on the Pacific coast) are easier to spot as they have smaller territories than otters living in river, and Scotland has historically been a population stronghold, of around 8000 individuals.

It is so special to see an otter in the first light of the early morning, when it is just you and them, and I know that I will spend many more mornings trying to spot these elusive mammals.