During the season Aigas employs up to 22 people, as well as a number of outside group leaders, who work closely together to ensure the place runs to the high standards we expect. Everyone helps everyone else and there is a strong team spirit here. 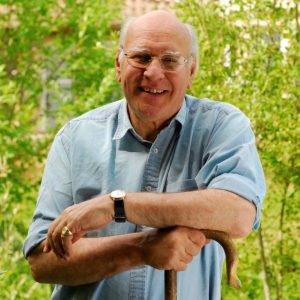 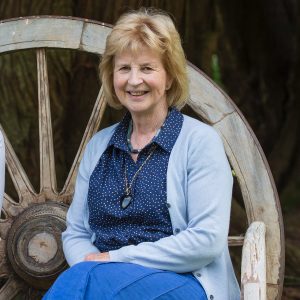 A local girl, Lucy’s mother was a Mackintosh of Moy. She runs the household at Aigas, as well as hosting and planning all menus for Aigas guests. In between times she is very active in fundraising for the Highland Hospice and acts as the organiser for Scotland’s Gardens in the Highlands. Her passion is the garden; she has created the Aigas gardens single-handed (with engineering support from John) and continues to extend them year on year. 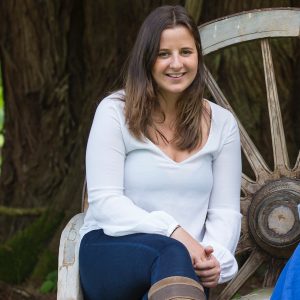 Daughter of John and Lucy, Hermione returned home with her husband, Greg, four years ago. She spent an idyllic childhood at Aigas exploring the estate on her Highland pony. After studying History of Art at university, Hermione went straight to work as a journalist at the Telegraph Magazine in London and then Scottish Field in Edinburgh. She still writes freelance when she can find the time. 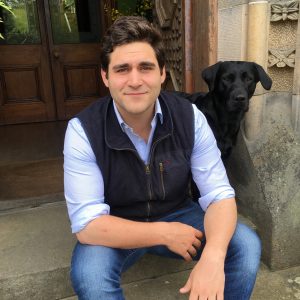 Greg swapped the green and pleasant lands of East Sussex for a life in the Highlands. After leaving university Greg moved to London and joined Foxtons where he built up an extensive background in property, he now manages the Aigas estate and its infrastructure. Greg is an avid rugby fan, having played for Harlequins in his younger years. 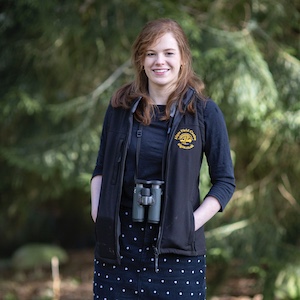 Having grown up in the beautiful local countryside, Susie has had a keen interest in Scottish wildlife and conservation from a young age. She studied Biology at the University of St Andrews, with a focus on Ecology and Zoology. Since starting at Aigas, Susie has particularly grown her passion for Scottish Wildcat Conservation, and in her free time enjoys skiing, playing music and baking. 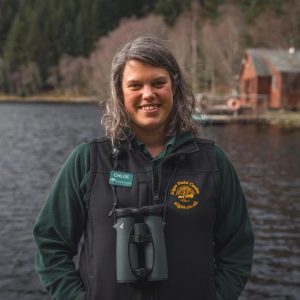 After a PhD in Ecology at the University of Aberdeen, a career in environmental education seemed like an excellent way of escaping the desk-bound world of academia. She hopes to encourage people of all ages, abilities and backgrounds to look at the world around them in more detail. Chloe manages the Education Team and provides as many people as possible with the opportunity to learn outdoors. 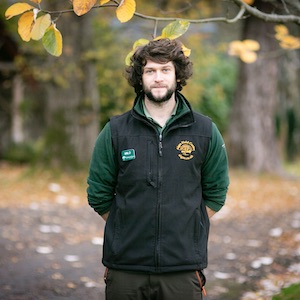 Milo comes from a background in Marine Biology, having studied Bioscience and Zoology at university. He has worked with whale sharks in the Philippines and surveyed marine mammals living in a lighthouse on the West Coast of Scotland, where he fell in love with the Scottish Highlands. Milo delights in birdwatching and brings his enthusiasm for wildlife to people of all ages. 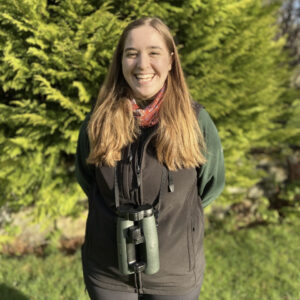 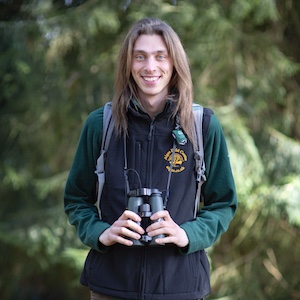 Calum has a keen interest in all aspects of wildlife and ecology, delighting in learning about all that is obscure and overlooked, from mosses and lichens to beetles and bees. During his time spent studying Conservation Biology and Ecology at the University of Exeter, Calum spent a year as an academic placement at Aigas. Upon completing his degree, he spent the summer working as an entomologist before setting his sights on a return to the Highlands! Calum also enjoys playing guitar and hillwalking. 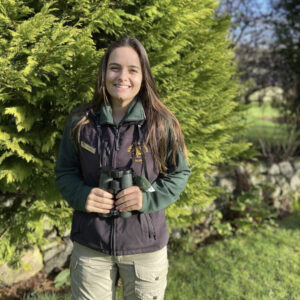 Growing up in the idyllic New Forest National Park in the south of England, Charlotte has always enjoyed being immersed in the natural world, inspiring her to pursue a degree in Zoology at the University of Exeter. In her third year of university, Charlotte undertook a placement at Aigas. Now she has finished her degree, she returns as a seasonal ranger. 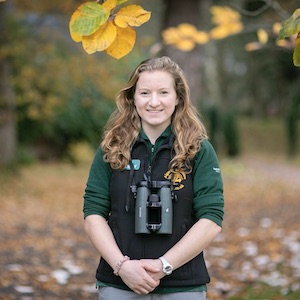 With Cumbrian roots, Emily spent many family holidays exploring the Lake District National Park, visiting the Farne Islands and Scotland’s Isles of Arran and Mull where she saw her first Golden Eagle! After her Zoology degree at the University of Bristol, Emily studied dwarf mongooses in South Africa for her Masters by Research. At home she enjoys birdwatching, monitoring dormice and writing. She hopes to add to her bird-ringing experience on Alderney, learn more about wildcats and climb a few mountains! 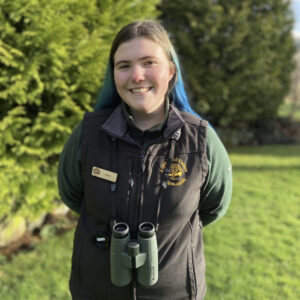 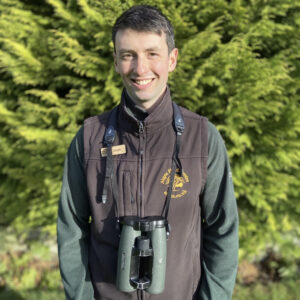 Dougie grew up on the Isle of Mull where he was surrounded by coastal and mountainous habitats and wildlife. After a few years working in the outdoor adventure sector, he studied Ecological and Environmental Sciences (BSc) at the University of Edinburgh in order to become a ranger. Plants are his favourite subject but he is passionate about learning and sharing the bigger picture of interactions between climate, geographic, biotic and human factors. In his free time, he enjoys escaping up mountains. 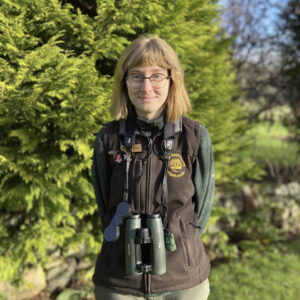 Eliane Bornoff – Academic Placement from the University of Exeter

Currently studying Conservation Biology and Ecology at the University of Exeter, Eliane’s love of the natural world was inspired by her upbringing in the scenic town of Ross-on-Wye in Herefordshire, as well as walking in the nearby Forest of Dean. Since studying at University, she has developed an interest in rewilding and hopes this up coming year at Aigas will provide the opportunities to further her knowledge of Scottish conservation.

Josephine Tod – Academic Placement from the University of Exeter

A childhood spent outside and several hiking expeditions through the mountains of Wales sparked Josephine’s interest in the living world. Time spent volunteering with the National Marine Aquarium and SEALIFE inspired her to move from Surrey to Cornwall to study Marine Biology at the University of Exeter. She hopes that her time at Aigas will develop her knowledge of Scottish wildlife and provide her with practical skills which could be applied to any future field of conservation. 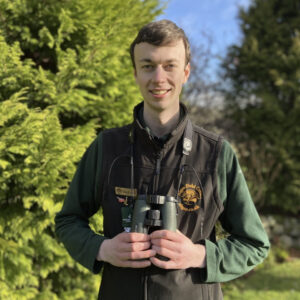 Matthew Broadbent – Academic Placement from the University of Exeter

Currently studying Zoology at the University of Exeter in Falmouth, Matthew has had a keen interest in the natural world, especially birds from a very young age. Since arriving at university, Matthew has furthered his passion for birding, as well as starting to develop an interest in moths, butterflies and other invertebrate groups. He is looking forward to gaining experience in the conservation, environmental education and guiding fields, along with learning about the breathtaking Scottish Highlands and its wildlife. Matthew also enjoys playing and watching various sports. 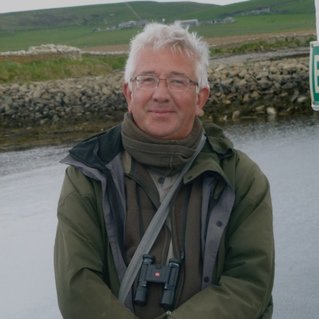 Robin’s ancestry is part Highland, part Island. He has known the Highlands and Islands all his life, and lived in Assynt, Orkney, Strathglass and Skye. He has been closely involved with Aigas since 1981, has led countless groups and taught generations of Aigas Rangers. He now spends much of his time writing. 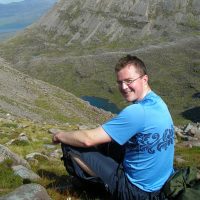 His first job, in 1995, was as a Ranger at Aigas Field Centre. It was here, he says, that he became the avid naturalist he is now. After Aigas he worked as a Countryside Ranger, Environmental Education Officer and for 17 year as a Local Authority Biodiversity Officer. He now guides full-time. Though he is interested in all of nature, dragonflies are his favourites. 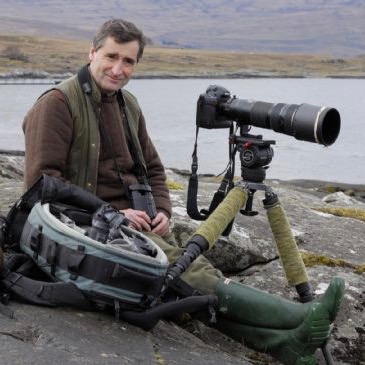 Laurie is Scotland’s most accomplished and best-loved nature photographer. His dazzling images have graced our website and all of our marketing material and presentations. He leads our photography weeks and they are always the first to fill – so book early to take advantage of Laurie’s patient and generous teaching style and limitless knowledge on all things photography. 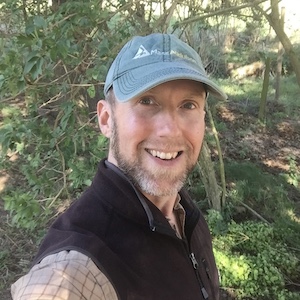 Dan is a naturalist, conservationist and environmental educator. A lifelong biophile, Dan worked for award-winning conservation charity Trees for Life for over a decade. He is a certified tracker, author of the FSC Guide to British Bird Tracks & Signs and has helped lead wolf and lynx tracking surveys in Slovakia. Dan teaches a range of naturalist skills including bird ID, wildlife tracking, botany, bushcraft, foraging and astronomy. 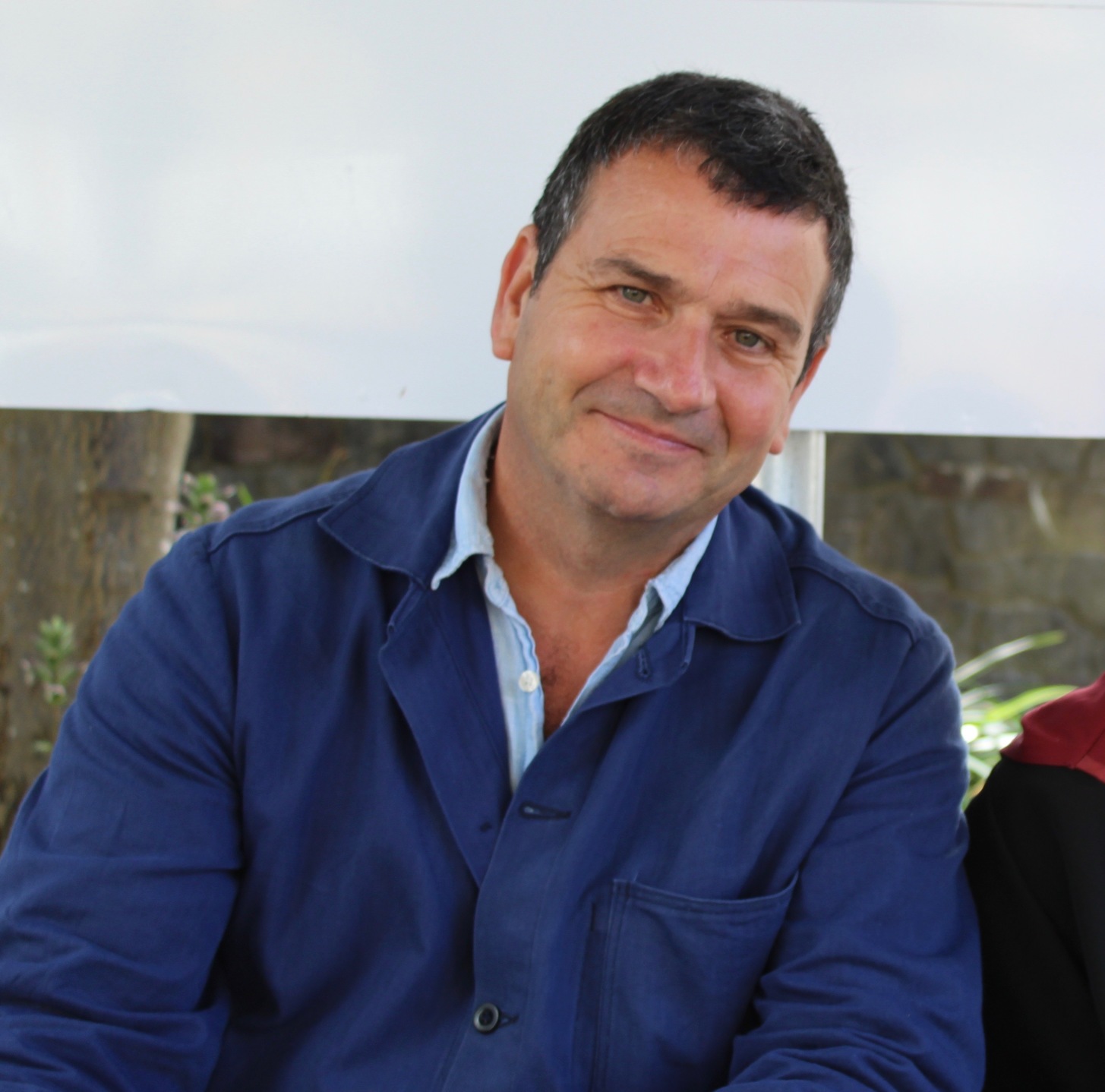 Mark Cocker is a celebrated nature writer and author of 11 books include works of biography, history, literary criticism and memoir. Birds and People (2013) was shortlisted for four awards. His latest Our Place is published in 2018 and is a hard-headed look at British conservation history. 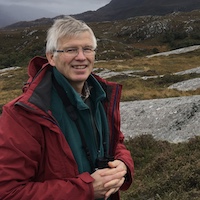 David Bale leads our wildflower programmes at Aigas, though he has a special interest in both plants and birds which he has been able to pursue academically and professionally. David has a BSc in Botany and Zoology with Ecology, and a PhD in peatland ecology. Before retiring, he worked for 30 years for Scottish Natural Heritage and its predecessor, the Nature Conservancy Council, dealing with protected nature conservation sites and species. 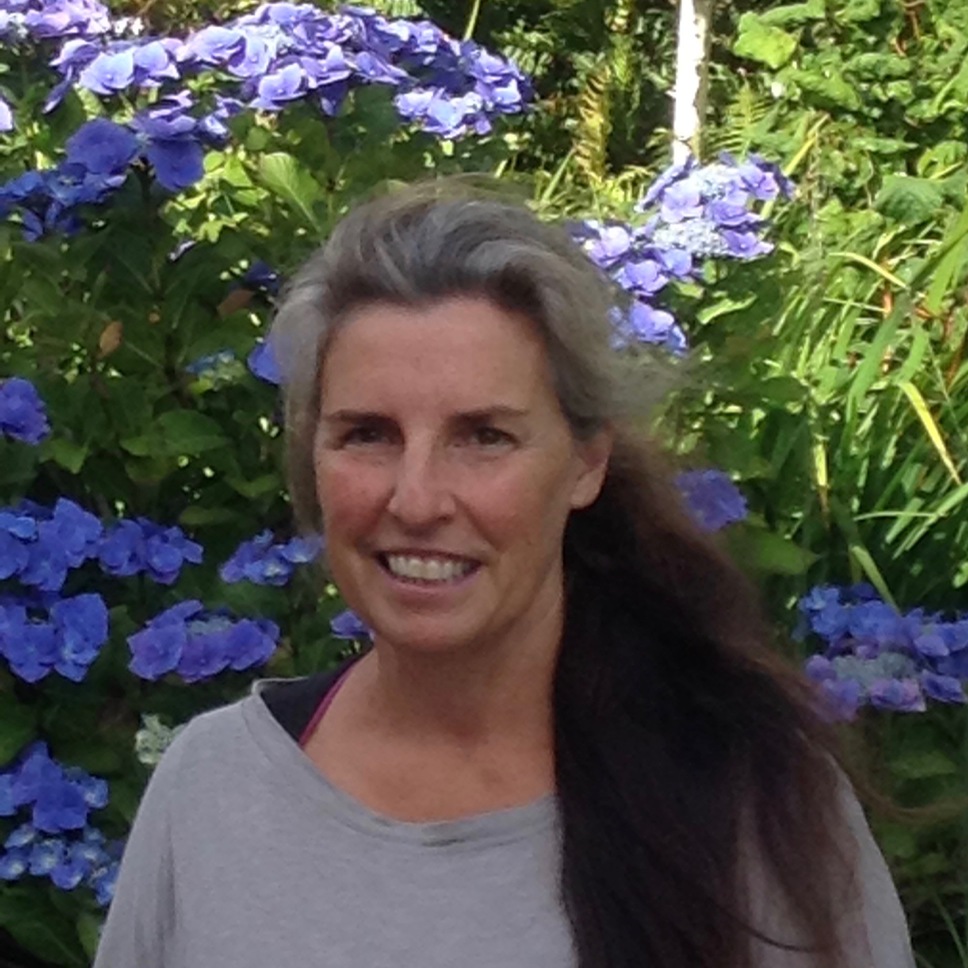 Sue was propagator at Inverewe Gardens for 14 years, which led to a deep interest in plants and their habitats in the wild alł over the world. She has collected plants from around the world and latterly has enjoyed guiding plant enthusiasts around gardens, as well as writing several papers on plant propagation. Sue’s own garden, 2 Durnamuck on the west coast, is open to the public. 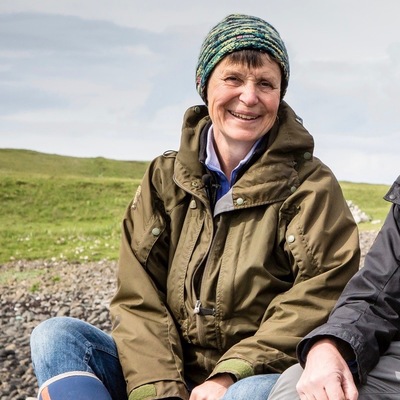 Liz Holden is one of Scotland’s most respected mycologists, a passion she has studied for thirty years, working in a range of habitats across the UK. She is an excellent tutor and loves sharing her fascination in the identification, recording and ecology of all fungi. 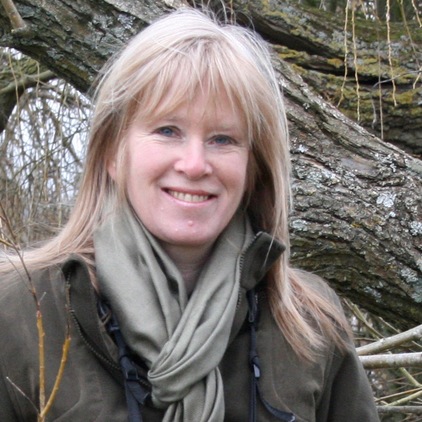 Jackie Garner is a professional artist who has always been fascinated by the natural world. Born and brought up in Gloucestershire, her early paintings celebrated the flora and fauna of beech woodland, limestone grassland and Severn estuary, all features of her home county. Jackie has exhibited extensively and was commissioned to design the 2015 Wildlife Habitat Trust Conservation Stamp. She is the author and main illustrator of The Wildlife Artist’s Handbook. 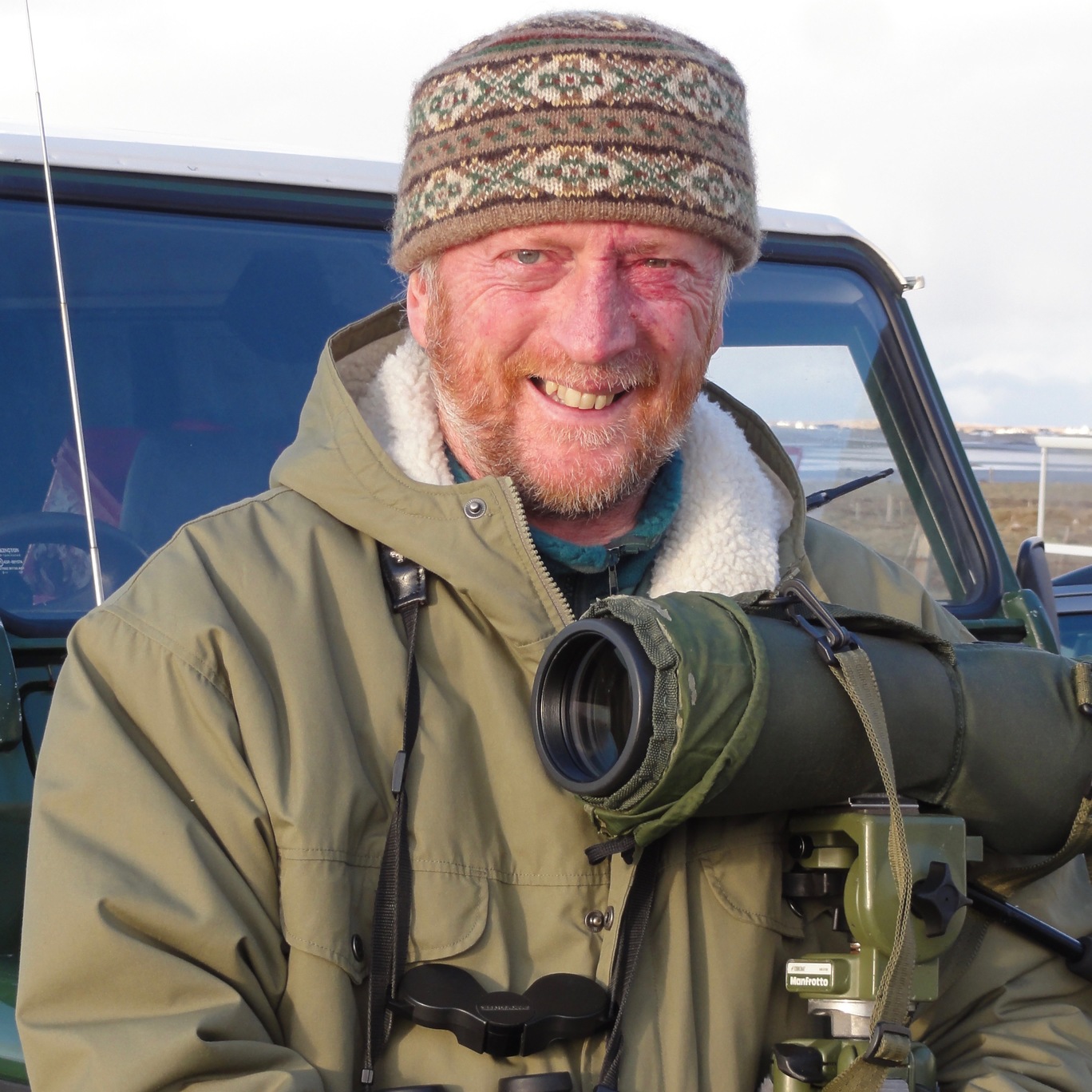 Following many years as the Head Ranger on Wirral and nine years as Head of Kindrogan Field Centre in Highland Perthshire, in 2014 Martyn moved to South Uist in the Outer Hebrides to experience life as a crofter. His croft is a haven for wildlife, and Martyn is able to indulge his lifelong passion for wildlife, the outdoors and archaeology – even finding time for the good things in life, such as the occasional nip of malt whisky! 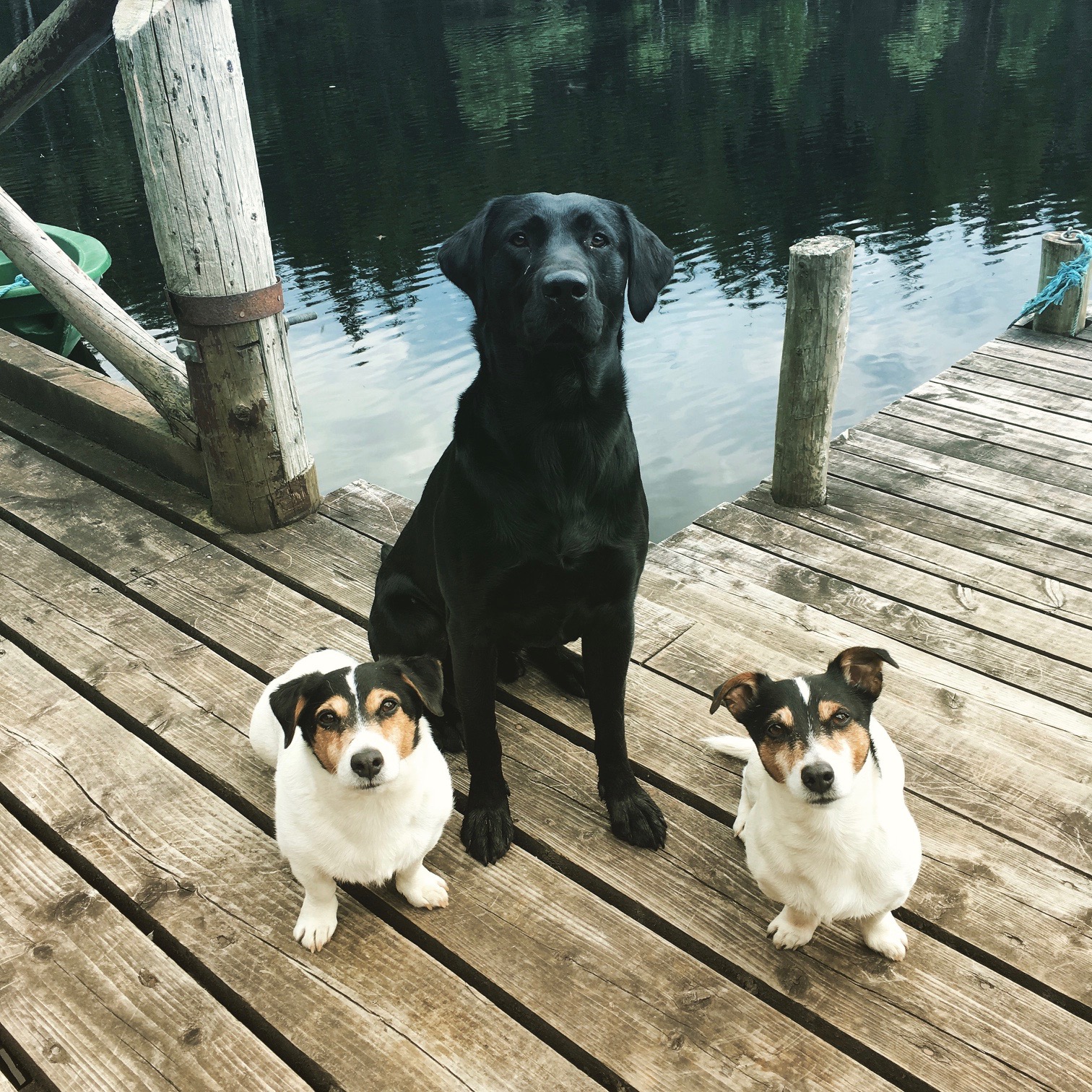 Elderly Jack Russell terriers, Nip and Tuck, continue to delight our guests and are not quite as obedient as they ought to be. They are outshone on a daily basis by black labrador youngster, Buster, who is still in training but doing very well. 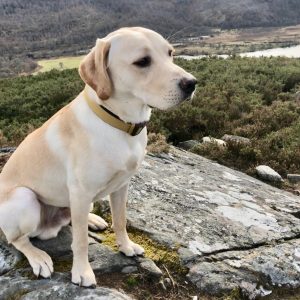 Yellow labrador Rollo is the newest addition to the Aigas family. He belongs to Greg and Hermione and training is very much still a work in progress! Sir John calls him ‘Yellow Peril’!