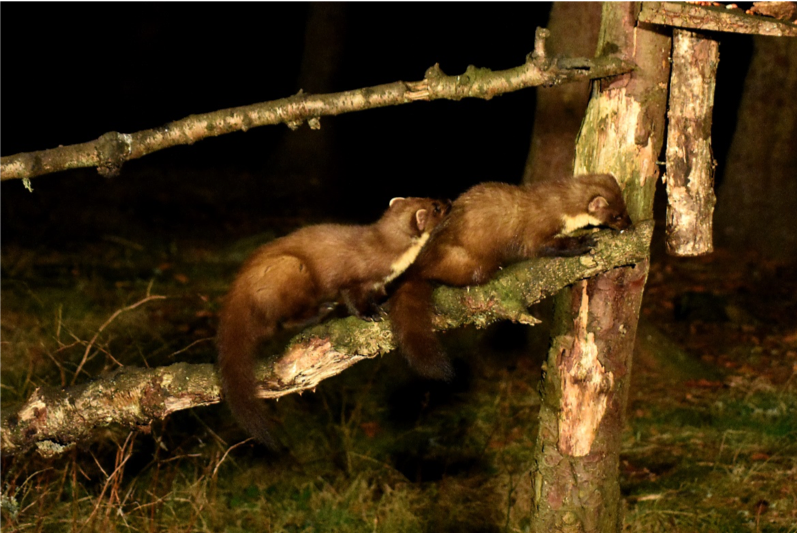 Before coming to Aigas I had never seen a pine marten. On arriving in February for the start of ranger training it was one of the species I was most keen to see, and at the earliest opportunity I took myself off to Quarry Hide for a spot of night time wildlife watching. Wrapped up warm against the chilly winter evening, I eagerly waited, training my eyes on the slightest hint of movement in the surrounding vegetation. I was soon rewarded with a brief glimpse of a barn owl, flying to a perch for a few moments before melting silently into the night. Not long afterwards, a badger snuffled its way into the pool of light in front of the hide, and started noisily gobbling peanuts from the ground. 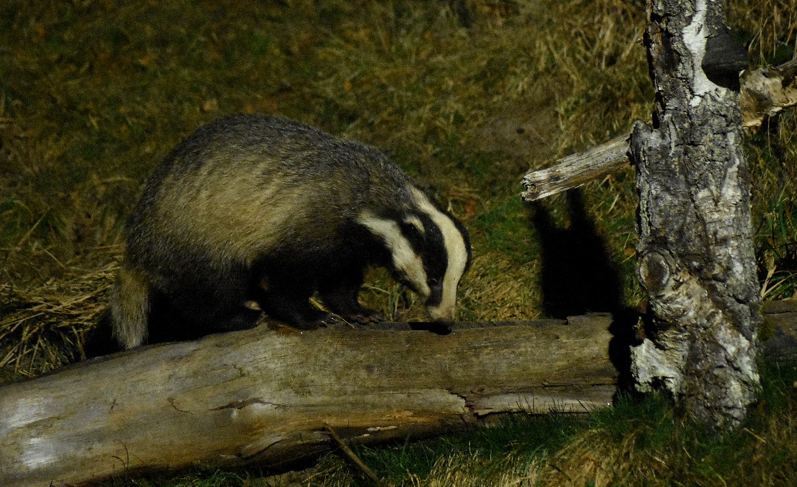 Glowing with excitement following the owl and badger sightings, I was totally unprepared for the sudden gasp of “pine marten!” from a fellow ranger at the other end of the bench. Sure enough, on the ledge right in front of the hide, a pine marten had appeared, as if out of nowhere. We watched in delight as, after a few moments of checking that the coast was clear, it started to work its way along the ledge in search of the peanuts we had put out for it. It was just a few inches from my face on the other side of the glass – I could see every whisker, every sharp pearly white tooth, the pinkness of its tongue as it licked up peanut crumbs. But the thing that really drew my attention was its coat – still thick with its winter layer of underfur, it looked so soft and dense I couldn’t help but imagine how it would feel to run my fingers through it!

After this incredible first experience of pine martens, I became fascinated by them. I chose them as the topic for my ranger presentation to give to guests during the season, and set to work researching their ecology and population history. I soon found that throughout much of human history, pine martens were valued primarily for the thick fur that I had myself admired that night in Quarry Hide. There’s evidence that pine martens were being hunted for their pelts from as early as the Mesolithic period, and this persecution peaked in Scotland between the 14th and 19th centuries. This association with monetary value is clearly reflected in their collective noun – “a richness of pine martens”. Thankfully, despite being faced with such a high level of persecution, whilst also suffering significant loss of their preferred woodland habitat, pine martens managed to cling on in the UK. There are currently believed to be around 3700 pine martens in Scotland, with most of these occurring above the central belt. Strathglass, the valley in which Aigas lies, has a relatively high population density compared to other areas of Scotland, reflecting the high quality of the woodland habitat here. The hides at Aigas have been providing fantastic views of some of our resident pine martens already this season – we really have been enjoying a richness of martens!

Over the last few years, Aigas rangers have been cataloguing the pine martens we have on site. Individuals can be identified by their bib pattern – the pale area on the chest which has a unique pattern of dark patches. By looking through camera trap footage and photos taken during hide visits, we can identify how many individuals we have on site, and monitor them over the years. I have taken on the job of producing the pine marten catalogue for this year. So far this season we have had at least three different individuals coming to the Campbell hide – Pickle and Onespot, both of which have been identified in previous years; and Patch, a large male who is new to the site this year.

We may well see some new faces over the coming weeks, as this year’s kits should already be well on their way! To be in with a chance of seeing our pine martens, why not book onto one of our Aigas Weeks, or treat yourself to a tailor made hide visit. If you manage to get any photos showing a bib pattern during your hide visit and would like to help build our pine marten catalogue, please send them to lucy@aigas.co.uk.