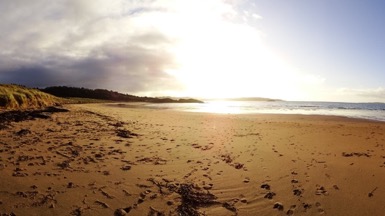 It’s not often that guests want to swim in the sea during their stay at Aigas, however we are more than happy to encourage those who brave the water! In the Highlands, the waters don’t tend to get much warmer than around 14 degrees Celsius in the summer, and that number can easily be halved over the winter months. The west tends to be slightly warmer due to the influence of the Gulf Stream, which brings with its current a warm flow of water. I know what you’re thinking – warm is a bit of an overstatement for Scottish waters… Well a couple of us rangers decided to put this to the test, and we have challenged ourselves to swim in the sea every month of the year, at least once. And by February’s standards, you are very much correct – ‘warm’ would not be used to describe the experience! 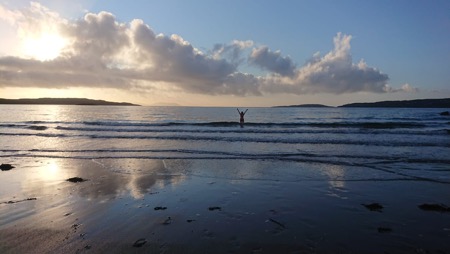 You may ask why we have come up with this challenge… And the simple answer is for the sheer fun of it. Firstly, we have so many beautiful beaches around the Highlands, hidden gems where you may not meet another soul in the off season. Secondly, the wildlife isn’t bad either! We had such a close view of a beautiful buzzard (Buteo buteo) flying right above us, our most common bird of prey which is often overlooked. There is so much variation in the colouration of buzzards, dark forms with a white feather ‘necklace’ and pale forms that gleam white in the sunlight. Meanwhile, black-throated divers (Gavia arctica) were popping their heads up far out at sea, their streamlined silhouettes effortlessly diving up to 6 metres deep to feed on fish. Who knows what wildlife we’ll see next time! 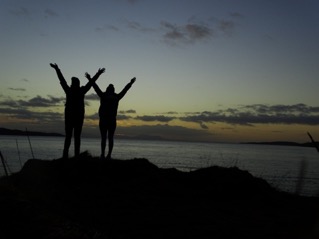 And thirdly, the pure exhilaration that you get after swimming in the sea is wonderful. Our February ‘swim’ was, admittedly, more of a quick dip, but we felt so refreshed afterwards, fully deserving of a hot cup of tea and a slice of cake! The sunset on our journey home was the perfect way to end a brilliant day. Why don’t you come try it for yourself – it’s not half bad in Scotland!

Words and photos by Emilie Shuttlewood.