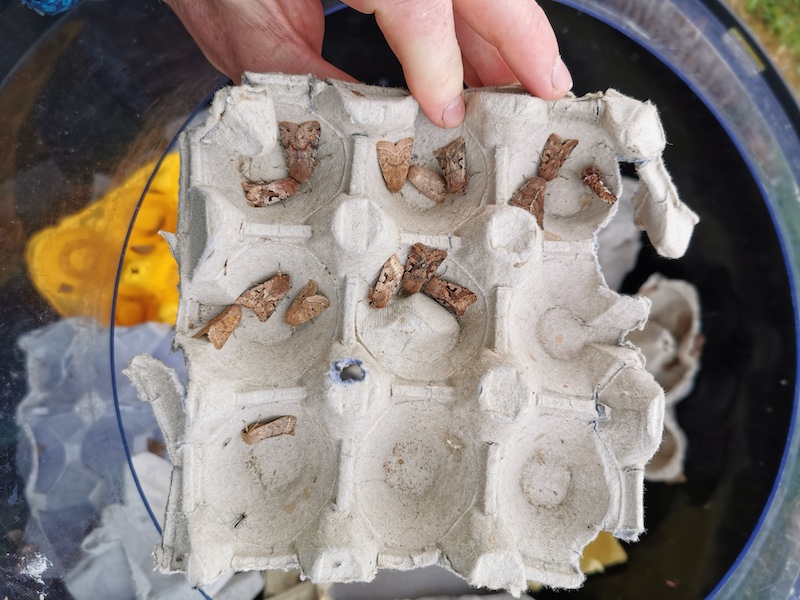 This season has been an odd one for us humans at Aigas, but for our wildlife it has been business as usual. We have been running weekly moth traps for the Garden Moth Scheme since March, and we have seen a whole host of species come and go through the months. First, we had the late winter/spring moths – the clouded drabs, hebrew characters, and the impressive brindled beautys. Then these died off and along came the early summer moths – brimstones, white ermines, and various pug species. As we moved into the height of summer the hawkmoths became regulars, alongside the stunning garden tigers and large emeralds. Autumn brought gorgeous colours to the trees in the landscape, and the moths followed suit – sallows, black rustics, and red-green carpets. As we head again towards winter, there are not many species around, and we see the more muted tones of the November moth, winter moth, and mottled umber. It has been a delight to monitor these oft overlooked but beautiful and fascinating creatures as the year has progressed, and in this post I will focus on some of the highlights of the Aigas season in moths.

The late winter/spring moths are often touted as quite dull and uninteresting, and with names like clouded drab and common quaker it’s easy to see why. But what these common spring species lack in obvious beauty they make up for in sheer numbers. At no point in the year were we catching greater numbers of single species than during these months, on the 24th April there were 136 hebrew characters in one trap! On the 10th April we had our biggest catch of the whole year – 274 moths, 107 of which were hebrew characters, while 77 were common quakers! These numbers are truly astounding and reflect the adaptability of these generalist moth species, which feed on a wide range of broadleaved trees (we have these in abundance here at Aigas!).

Despite the tendency for brown colouring in spring moths, they are far from drab! Many of the species we saw at Aigas this year were beautifully marked, and although colourful species were few and far between, those that we did see were magnificent! In March, we caught a handful of Rannoch sprawler moths, a species localised only in the Highlands and Perthshire. This lovely moth, painted in hues of brown and grey feeds only on birch and ancient birchwoods are its favoured habitat.

At the beginning of April we caught the first pine beauties of the year. These stunning orange-red and brown moths, perfectly camouflaged as pine buds, stood out like gems in the moth trap. With majestic lion-esque manes they were a true delight to the eyes. This moth feeds on scots pine and other pine species, and, contrary to the general decline in moth numbers, is becoming more abundant due to the amount of pine being planted for commercial forestry and for conservation throughout Scotland.

As spring progressed, temperatures rose, and flowers started to appear on trees and the ground, so we saw the diversity in our moth traps increase. Each week saw new species appearing: the red sword-grass, easily dismissed as a twig with its incredible camouflage, the chocolate brown scarce prominent, the gorgeous ruby tiger in its deep red cloak. By early May the clouded drabs, hebrew characters, and common quakers had all but disappeared, leaving comparatively empty traps. At this point, it wasn’t the numbers that were impressive, but the variation in shapes, colours and sizes to be seen. The end of May saw arrival of fox moths, with their extraordinary antennae, and the much anticipated first poplar hawkmoth of the year!

The summer months brought moths in a full spectrum of colours. Pink elephant hawkmoths and peach blossoms, yellow brimstones, light emeralds and green silver-lines, and common white waves and white ermine. It is at this time of year that some of the showiest species emerge, and they don’t get much gaudier than the burnished brass. This species, alongside related species such as beautiful golden y and the gold spangle, has iridescent metallic markings which glitter in the sun, and fluffy ‘fins’ coming out of its head and abdomen. This moth, which as a caterpillar feeds on nettles, was a real highlight for the year, despite being quite common.

In June we caught a small drab brown moth, which turned out to be very interesting. It was a micro moth, Anania terrealis, only the second record for the vice-county. The only other record was in 2011, just down the road in Kilmorack! This moth specialises on goldenrod as a caterpillar, and its distribution is mostly southerly and western. Alongside this, we caught two other brown moths which turned out to be new to the Aigas site. The wood sage plume, with its strange shape (unique to plume moths), and its dark brown and white striped markings was a beautiful surprise. Although we have plenty of wood sage on site, this moth likes dry, stony south-facing slopes where the foodplant grows, which is a habitat we don’t have in abundance on site. It will be interesting to head out in Spring to look for the characteristic feeding signs of the caterpillars, which chew through the stem of wood sage, causing it to wilt before feeding on the leaves. The final small brown species was the cloaked pug, which apparently died out in Britain in the early 20th century. It has since been rediscovered in parts of England, Wales, and Scotland, perhaps due to migrant individuals recolonising. It is perhaps unsurprising that it has turned up on our site, given we have plenty of Sitka spruce and noble fir, where the larvae feed within the cones.

The autumnal moths are some of my favourites, their colours matching those of the surrounding tree leaves. Particularly gorgeous are the sallow species, displaying yellows and pinks in various shades. As the name suggests, the caterpillars of the sallow and pink-barred sallow feed on the catkins of sallow (willows) and poplar species. Resting on a fallen birch leaf, they are all but invisible.

The black rustic exhibits a very different kind of beauty – it’s almost jet-black forewings flecked with white contrasting with pale grey-white underwings. To me, its appearance is almost as emotive as the more well-known Death’s head hawkmoth – a harbinger of Death, a cloaked figure in the night perhaps. Despite their eery appearance they are nonetheless stunning

The autumnal moths here in northern Scotland only last into September. Our seasons tend to be shorter, and where some moth species may have two or three generations in a year further south, moths up here tend to only have one. October brings moths better adapted to survive cooler temperatures, and when November arrives the moths must be able to live through sub-zero nights and snowfall. These times herald the return of traps containing mostly drab brown/grey species. The winter moth and November moth, perhaps not that impressive to look at, amaze in their ability to survive harsh Scottish winters, exploiting a niche that few others can. The winter moth is particularly interesting – the females are wingless, relying on males to come to them to mate. The eggs are laid on tree buds and hatch coinciding with bud burst. The larvae are perhaps the most important food source for nesting tit species – you can tell if it will be a good year for tits if you look up into the canopy in spring and see lots of feeding holes produced by winter moth caterpillars.

An appreciation of moths

I could write a book just on the moths we have caught this year at Aigas. I have tried to select species to write about based not only on their beauty but because they were maybe unusual or of particular ecological importance. There are not many activities where you can see as much diversity in one place so close-up as moth trapping. The moth recording scheme is one of the longest established citizen science projects in the UK, and has contributed greatly to our knowledge of the state of our nature and opened our eyes to trends we may otherwise have missed. It has been a pleasure to have contributed to this knowledge this year at Aigas.

Words and images by Tay Davies