Now that the holiday season is over at Aigas, us Academic Placements have each been tasked with designing and completing a project over the winter. I remember, very soon after arriving, having a conversation with Hermione and Susie about these projects and a Pine Marten Catalogue was mentioned. A couple of years ago, a previous ranger at Aigas (also called Lucy), compiled a catalogue of all the pine martens on site. Each had been individually identified by their unique creamy bib pattern, named and photographed, with their profiles pinned to the wall of the Campbell Hide for guests to read. Some more recent Pine Martens were also identified by Louis, who did his placement at Aigas last year, but there is the possibility that there are more pine martens who are yet to be identified and that a few of the older faces may no longer be with us, with some individuals last seen in 2017. Consequently, I thought I’d give a new, updated Pine Marten Catalogue a go! 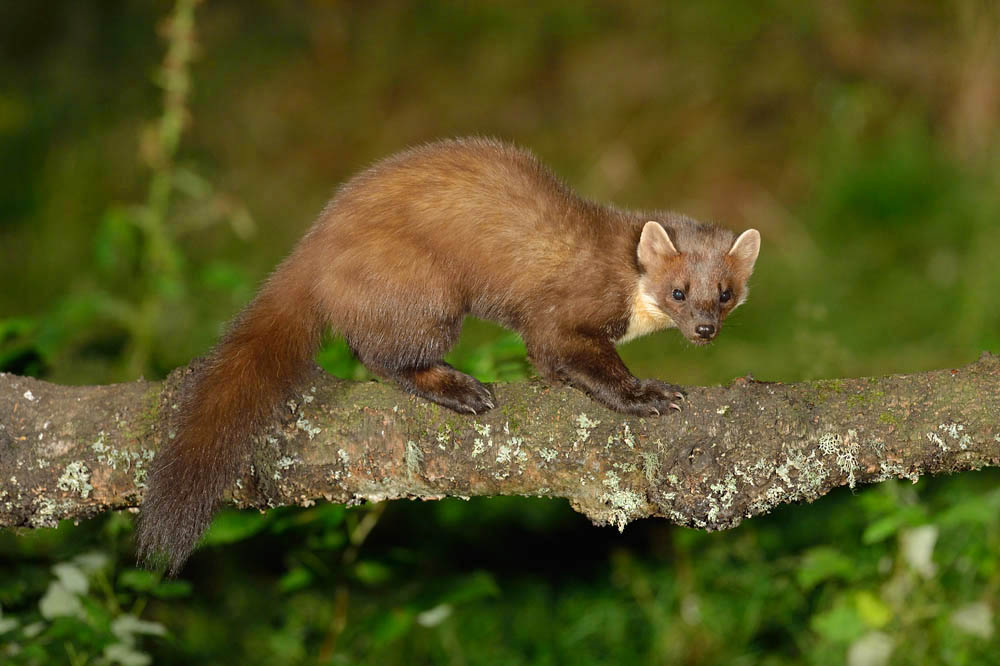 Pine martens (Martes martes) are nocturnal mustelids native to coniferous woodlands across the UK. Threats such as hunting, deforestation and traffic have seen their numbers decline, prompting their protection under the Wildlife and Countryside Act of 1981. Even so, Pine martens are now only found in pockets in Ireland, Wales and Northern England, and across the Scottish Highlands, with a healthy population here at Aigas. Deforestation has been so devastating to pine marten populations because pine martens are skilled climbers who prefer to live in the holes and cavities of mature trees, as well as abandoned squirrel drays and bird nests. Furthermore, these healthy woodlands cater to the pine marten’s omnivorous diet, providing habitats for small mammals such as voles and mice, small birds and their eggs, many insects and trees bearing fruit like rowan berries and bilberries. They even show an interest for peanuts and honey, explaining why we get hungry pine martens visiting our hides. It has been suggested that their diet even stretches to grey squirrels, with evidence showing that where pine martens are abundant, grey squirrel numbers are low. This benefits red squirrel populations which now experience less competition against greys and are less likely to come into contact with squirrel pox. The pine martens aren’t as much of a threat to red squirrels as they are to their grey cousins either as, whilst they’d happily tuck into a dinner of red squirrel, red squirrels are light enough to escape their advances by walking out onto the very edges of branches, which would snap under the weight of grey squirrels and pine martens. Whilst an avid predator themselves, it is important for UK ecosystems to host healthy pine marten populations as they are good prey for foxes and golden eagles.

In terms of their life histories, pine martens are solitary mammals, living up to 8 years old, who only interact during the summer mating season. Sexually mature by around 2 years old, pine martens attract a mate by producing unmistakable, high-pitched yowls. The following spring the females give birth to a litter of 1-5 kits who will only emerge from their den when they reach 6 weeks old. By 6 months, these offspring are fully grown and leave their mother in the autumn. 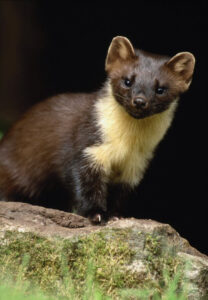 My aim for the Pine Marten Catalogue is to ID as many of the pine martens at Aigas as possible. This means many a hide visit, wrapped up warm with a flask of hot chocolate, taking notes, drawing sketches and snapping photos of these elusive creatures. Not a bad way to spend the evening! As beautiful as pine martens are, with their rich chocolatey fur, round ears and long bushy tail, I’m mostly interested in getting good photos of their yellow-cream bibs on their chest and throat as these bib patterns are unique to individuals. Tay had previously considered building a wooden box, open at one end with a camera trap at the

other, where food could be hung from up high to encourage a pine marten to walk up and extend its neck, exposing its bib to the camera trap. Pretty nice idea, so I thought I’d take inspiration … or pinch it, more like! Hopefully this bib box will live up to the picture I have in my head and allow me to get lots of clear shots of pine marten bibs!

There’s also the possibility of mapping the distribution of pine martens on site. Where on site do they go? I know some of the other placements like the idea of doing this so I might not run with it, but if I do get the chance to do it I’m thinking about trawling the sight at Aigas with a map of the site and marking in pencil the exact spots where I come across evidence of pine martens, such as prints and scat. Pine marten scat is pretty distinguishable; the scats usually contain berries, bones, fur, feathers and seeds, with many of our pine martens at Aigas seemingly keen on rowan berries. They are also left in prominent places, like in the middle of trails and on top of boulders, to mark territories. Furthermore, it might be possible to not only map the distribution of the pine marten population as a whole but to map the territories of individual pine martens. Once the individuals on site are more familiar to us and we have documented their bib patterns, the bib box could be moved regularly to different locations on site to hopefully get footage of recognisable pine martens to then see the routes and locations that individuals frequent.

I can’t wait to get started and I feel so lucky that I’ve been given a chance to get so familiar with our pine martens! Hopefully, it all goes well and I’m looking forward to keeping you updated!