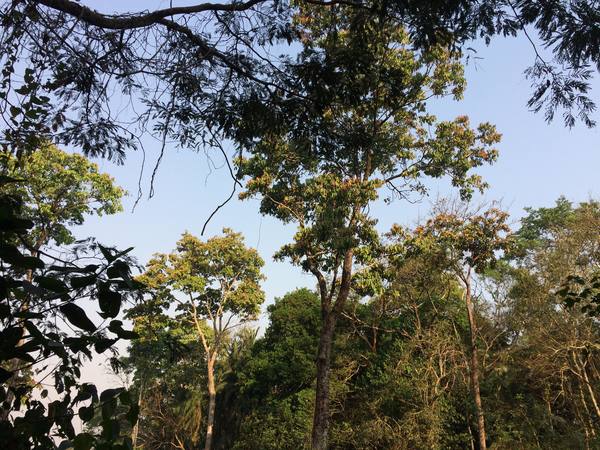 I arrived in Hoima, Uganda, on Monday 15th, and since then it has been an absolute whirlwind of experiences, every one of them incredible.

I spent a night in the Itahyo Forest where the Chimp Trust works with the community to manage the forest effectively for chimps and biodiversity. The forest is beautiful and peaceful, with a tree nursery inside being managed by the forester. The dedication of this man to the forest he has managed for decades is inspiring. During the evening a group of wild, unhabituated chimps decided to nest about 100m away from the lodge, meaning I was able to watch them the next morning for over an hour – another bucket list moment of this trip. I was not alone in watching these chimps. I was privileged to be watching with Lilly Ajarova, the director of the Chimp Trust and a team of film producers who have lent their talents to the trust in order to make a promotional documentary for the trusts 20 year anniversary. The team was generous enough to allow me to join them on their travels in the Hoima region.

Over the course of two days we visited several people who live in areas with wild chimps and whom the trust is working with to ensure peaceful co-habitation. These people included a bee-keeper who is reforesting his land to tackle fragmentation, a mother whose 6-month old baby was severely injured by chimps and a women’s group who have been empowered by the chimp trust with training on alternative income activities – basket making and bead making, both with beautiful results.

The visit that I’d like to illustrate more was to a man named Julius, who was born to a prominent cocoa farming family. He had massive problems with chimpanzees destroying his crops and in fact tried to persuade his appointed Ugandan Wildlife Authority guard to shoot them. Luckily, his story took a different turn. The Chimpanzee Trust worked with Julius to build a large tree nursery as an alternative income for him. He now generates far more income than the cocoa farming would allow, the trees are bought by NGOs for reforesting fragmented habitats and he has no issue with chimps anymore, he shows overwhelming gratitude to the trust and seems to truly understand the importance of chimp conservation. In his own words “when there is no conflict, there is no hatred”. This visit filled me with hope about how conservation activities can be successful and beneficial to all parties.

It was an absolute pleasure to meet Julius and he was kind enough to allow us each to plant and name a tree. I planted a tree of the maesopsis genus, and named it the Aigas Tree. As many of you now, there is a tree in Glen Strathfarrar that our logo is based on and is known to the field centre community as the Aigas Tree. Well now there is a sister tree in Uganda, which will one day hopefully provide habitat for chimpanzees. An enormous thank you to the staff who have worked with me so far, and I will keep everyone posted on my final days in Uganda!

Words and images by Alison Tait