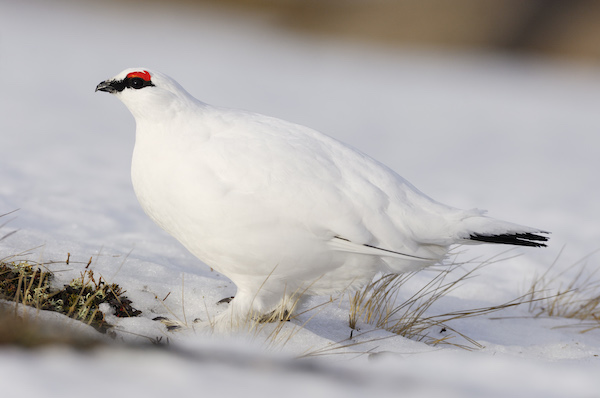 We rose early, eager to reach the mountain. Our goal: catch a glimpse of the elusive ptarmigan (Lagopus muta), a bird that breeds and winters at high altitudes throughout the Highlands. In summer these birds have a cold, speckled grey plumage; in winter they are almost entirely white, a camouflage against the snowy mountain backdrop they call home. I knew we had a hard task ahead of us; the ptarmigan is well camouflaged and small (roughly wood pigeon sized), and we had a lot of ground to scan. I hoped to recognise the bird by its distinctive call; the ptarmigan’s Japanese name translates to ‘thunder bird,’ due to the deep, booming croak that the bird produces. While in my opinion it sounds a little more like a pig than a thunderstorm, the noise is instantly recognisable either way.

As we drove up the winding road to the Cairngorm Mountain Ski Resort, I did a quick bit of research as to what other organisms we could expect to see. Cairn Gorm is a key stronghold for several scarce species of British flora and fauna. While in spring and summer many different wildflowers and birds can be spotted, in winter the most well-recorded species are restricted to ptarmigan, snow bunting, mountain hare, and red deer. I personally had never seen a mountain hare in its winter coat before; something else to keep my eyes peeled for!

Not even having left the car park, we had our first sighting of the day; not a ptarmigan, but a flock of snow buntings (Plectrophenax nivalis)! These little birds can be found year-round throughout the Cairngorms. In summer the males are, like the ptarmigan, a distinctive white. In winter, they don’t look dissimilar to a slightly dulled goldfinch that’s been inflated by a bicycle pump, due to their shared black-and-white wing bars. This flock was 32 strong, but despite my best efforts I could only get a couple of photos. Neither this, nor the out-of-order funicular were enough to deter us, however. Just after setting off up the trail, we sighted more bird species; a raven and (somewhat bizarrely) a grey heron soaring overhead, and three bullfinches flitting across the landscape. Surely this would bode well for the rest of our trip?

As we continued across the landscape, the path up the mountain disappeared into dense fog. The higher altitude brought a light dusting of snow, every footstep resonating with an audible crunch. We could hear red grouse clucking from across the wide expanses of heather, hidden among the snow-covered boulders dotting the hills – but still no sign of a ptarmigan or a hare. Our time alternated between scanning the horizon and failing to resist the temptation to fling snow at each other. This went on for several hours until, having still not seen a ptarmigan, we set off back down the hillside. As we approached the car park the same large flock of snow buntings flitted past, their soft whistles carrying through the still air. While we didn’t spot exactly what we came for, the beautiful surroundings alone were worth the trip – and snow buntings are something new to add to my bird list! I haven’t seen anywhere near what this mountain has to offer, and I have a hunch that it won’t take very long to draw me back.