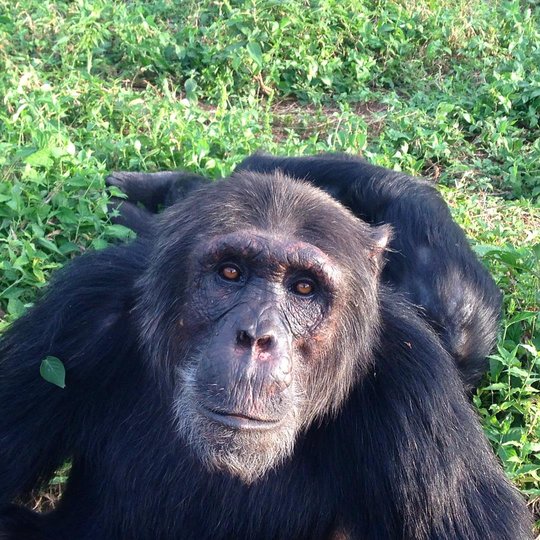 I am sat writing this blog post after watching the sun set over Lake Victoria. I am fortunate enough to be spending three weeks volunteering for The Chimpanzee Sanctuary and Wildlife Conservation Trust (The Chimpanzee Trust), an NGO based in Uganda which focuses on rescuing orphaned chimpanzees and working to tackle the problems that lead to these individuals becoming orphans in the first place. This involves working directly with communities who inhabit areas where wild, unprotected populations of chimpanzees are known to reside. Aigas Field Centre runs a staff exchange programme with the sanctuary so that we can share knowledge, skills and experience with fellow conservationists from completely different backgrounds.  Earlier this year we had the sanctuary manager and vet, Dr Titus, over to stay with us and learn about the work that we do in the wild highlands of Scotland.

At the moment I am based at the sanctuary itself, which is located on Ngamba Island on Lake Victoria, a 100 acre island situated 23km south west of Entebbe. The island is home to 46 rescued chimpanzees and 3 unplanned individuals (more about these later!). Something that has blown me away is the abundance of other wildlife that the island is also home to. Ngamba is part of the Koome group of islands, many of these are highly populated with fishing families, they lack forests cover and are not particularly wildlife friendly places. As 95% of Ngamba Island is covered in forest, it has become an important refuge for wildlife in an otherwise fairly hostile area. By the end of my first day here I had seen Nile monitor lizards and neck spotted otters swimming just feet away from me, tens of village weavers constructing their nests in the trees next to the kitchen, hundreds of egrets and cormorants flying into the trees around the staff camp to roost and quite literally thousands of fruit bats emerge from the forest as the sun began to set. I could not believe my eyes when I saw the seemingly never-ending swarm of bats emerging in the distance, I later asked one of the keepers here about the bats and he informed me that when they last monitored their numbers they counted over 20,000!

Ninety five acres of the island is forested, this area is completely fenced off and is dedicated to allowing the chimpanzees to roam and experience a life as close to the wild as possible. Every evening the chimps return to a holding facility just behind the staff camp, they are given their dinner here and are happy to come in from the forest each evening. The reason the chimpanzees must return each evening is to conserve the forest, the fact that it is fenced makes it a limited resource as the chimpanzees cannot roam elsewhere to pastures new. It is not actually the foraging activity that is most destructive to the forest, it is the behavior of nest making. In the wild chimpanzees make a new nest each evening using branches and leaves which they break off from trees, allowing them to do this every day in just 95 acres of forest would just not be sustainable. Having the chimpanzees sleeping so close to the staff camp is an interesting experience as they usually wake up during the night and communicate to one another, often in the form of loud screams as they have minor altercations (these do not sound so minor when one is lying in bed trying to sleep!).

Before the chimps are released each morning they currently have an integration session. A young male called Eazy is the target of these sessions. He was born in 2015 to Afrika, a young and inexperienced mother aged just seven years. All of the teen and adult females have a contraceptive implant and the keepers had not realised that Afrika’s had failed and that she had become pregnant. She gave birth during the early hours of the morning, this meant that the keepers were not there to intervene when the other females grabbed the baby and fought for possession of him. This would not happen in the wild as each female would have the chance to become pregnant, however at the sanctuary baby chimpanzees are a rare and hot commodity. Eazy’s arm was badly broken in the process and the keepers were forced to hand raise him until he was strong enough to return to the main group, not an ideal situation but a decision that had to be made. Eazy has since been slowly integrated with the other chimpanzees, this process has taken a number of months as he is a male and can be seen by other males as a potential threat to their status within the group. The team here is currently integrating Eazy with the alpha male and so far everything is going well.

The second infant born here is called Angel and her story is also an interesting one. The keepers knew that Angel’s mother, Surprise, was pregnant and were therefore able to protect the baby by segregating Surprise before she gave birth. The interesting thing here is that Surprise learnt how to remove her contraceptive implant from her mother Keti! Surprise was the first baby to be born here, hence her name, and Keti became pregnant because she had removed her own implant. This is a very clear example of lessons being passed down from one generation to the next. Keti is a devoted grandmother to Angel and clearly enjoys spending time with the little one.

I will be sure to share more stories about the chimpanzees here at the sanctuary, I am learning something new every day about how individuals socialise with one another and it is truly fascinating to observe their behavior first hand. Next week I head to the Hioma Field Centre which is the base for The Chimpanzee Trust’s vital community outreach programme, focused on saving the threatened wild populations of chimpanzees. Pay the site a visit soon in order to read about what I learn from the team there.