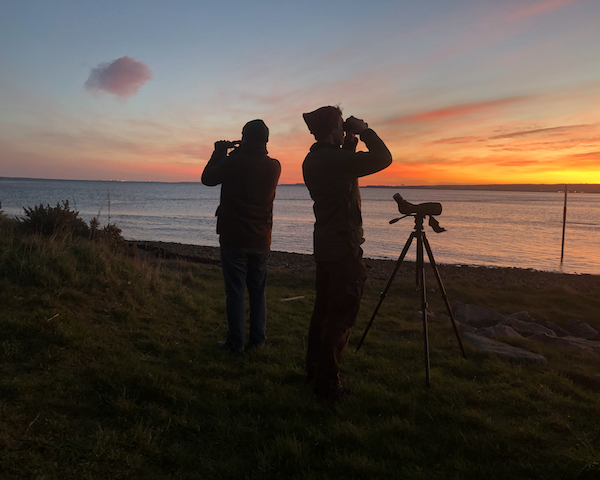 It was still dark as we gathered at the front of the house, wrapped up in hats, scarves, gloves and thermals, clutching our coffee filled thermoses. Few words were uttered as we loaded into the minibus and took our seats; it was not yet 6:30am.

As we approached the coast, the first light of the sun had almost reached the horizon and shards orange escaped from the darkness.

Tentatively we unloaded our Swarovski ‘scopes and began to scour the shore in silence and hopeful anticipation. Every ripple catching the dawn twilight made our hearts flutter.

First, a grey seal popped up as if to mock us. He rolled back his head, sniffed loudly and disappeared. Several more minutes passed, each lighter than the last. Then, one of the rangers let out a hushed shriek, followed by a series of exaggerated hand gestures prompting us to look right. Nothing. What might have been an otter had vanished behind a cusp of protruding rocks, only twenty feet away. We all tiptoed around the sea wall like panto-mimes, only to see the distinctive V-shaped wake of the otter disappearing once again behind an outcrop of rocks a few feet away from us.

Again we crept on in silence, keeping low. As we passed the outcrop, keeping well hidden by thick roadside gorse, we came upon a long stretch of shoreline. Surely now the otter could not disappear from sight once again? And then we spotted them; a mother and grown pup fishing for lugworms, crabs and shellfish in the pebbly shallows less than thirty feet from us.

Earlier in the minibus Ben, Aigas’ Staff Naturalist, had likened the sight of an otter coming up for air to a plastic bottle being released from underwater, bobbing vertically out of the water – and this exactly what we saw over and over again as they broke the surface with their catch and spent a few moments chewing before diving down again.

We watched this for thirty minutes as the pair fished, slowly coming closer to us on the incoming tide until they were so close we could hear crab shells crunching in their teeth. Through the telescope we could clearly see their flattened head and little ears, black diamond-shaped nose, bristly vibrissae (whiskers) and sharp dog-like teeth.

Over an hour later, now in daylight, we decided to head back to Aigas where Lady Lucy was rustling up a breakfast of champions.