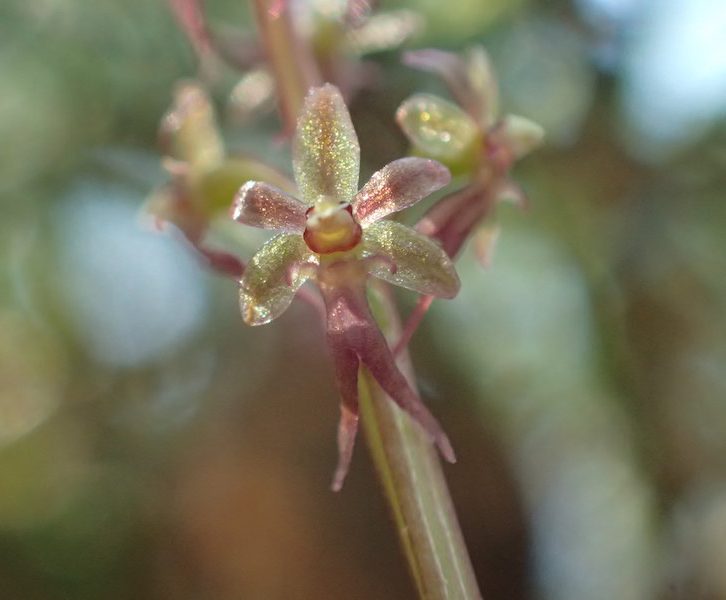 Orchids have captured people’s imagination for generations. Many have unusual flowers that look like tiny men, ladies in dresses or monkeys (giving rise to the English names Man, Lady and Monkey Orchids). Others mimic bees, wasps or flies to trick the insects into pollinating them without a nectar reward. Some are proud, bold and bright, others have a more unobtrusive, subtle beauty.

Here in the Highlands, you can find around 20 of Britain’s 50 or so species. The most common two are the Northern Marsh Orchid (Dactylorhiza purpurella) and the Heath Spotted-orchid (Dactylorhiza maculata). With their large spikes of ornately patterned flowers, they probably fit in to the ‘proud, bold and bright’ category! Both are found in a variety of habitats, from grasslands and heaths to marshes and bogs, and are common at Aigas.

One of less common species is the Lesser Butterfly Orchid (Platanthera bifolia). This wonderful orchid has declined heavily throughout the UK in the last century due to habitat loss, disturbance and overgrazing, but it retains a stronghold in the west Highlands. Its night-scented flowers are particularly attractive to Hawkmoths, the main pollinators of this species.

Perhaps our most inconspicuous orchid (a definite member of the unobtrusive, subtle beauty group) is the Lesser Twayblade (Neottia cordata). It is not uncommon in Highland pinewoods, but can be devilishly tricky to spot being only 5-10cm tall with tiny greenish-purple flowers. It flowers on the Aigas site in late May or early June each year.

Finally, the rare and somewhat mysterious Coralroot Orchid (Corallorhiza trifida). In Britain this species is almost confined to the east Highlands, where it is most often found in damp, shady woodland amongst Sphagnum mosses. It is saprophytic, meaning that its main source of food is dead organic matter, such as decaying leaves and moss. It has no roots of its own at all, so accesses these nutrients via a network of hyphae (fungal strands) from a fungus with which it has a symbiotic relationship. It also produces a small amount of its own food via photosynthesis.