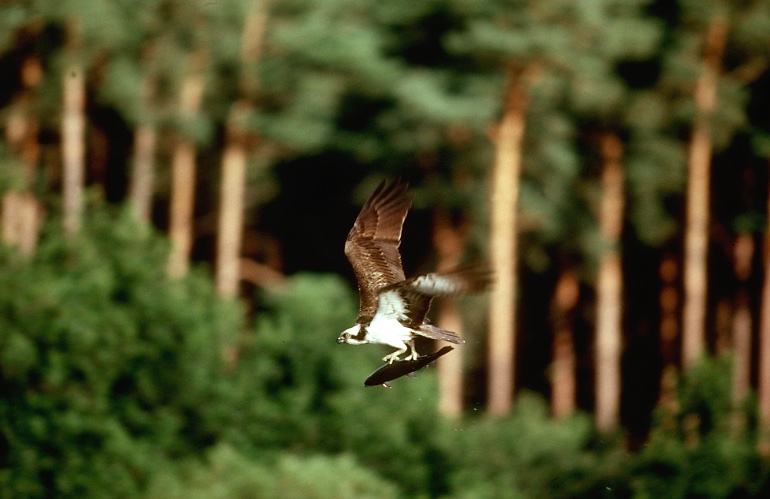 It is the time of year again where, as part of a walk around the loch at Aigas, you can often be lucky enough to see these stunning birds of prey. The loch is seasonally stocked with large blue and rainbow trout specifically for the osprey, the trout even attracting an adult white-tailed eagle to fish on the loch earlier this spring. This blog will talk about the physical characteristics, distribution, ecology, history, and current conservation projects working with these distinctive raptors.

The osprey (Pandion haliaetus) is the only species within the Pandionidae family, consisting of four recognised subspecies. Ospreys have a distinct plumage, looking white or mottled brown when observed from below. The crown of their head is pure white with a brown stripe and their bright white chest feathers make them easy to spot when perched in a tree (often a bright white spot in an otherwise green or brown landscape). They are one of the larger birds of prey: typically 52-60cm in length, with a wingspan of between 145-170cm. They weigh in at between 1.2-2kg, with females being generally 20% larger than males. If you get a close sighting, you can see their bright yellow irises, sharp black beaks, and blue feet. They typically have a lifespan of around 8 years, however, there was a wild osprey that was found to be 32 years old!

There are several morphological characteristics of the osprey that make it perfectly adapted to its piscivorous (fish eating) lifestyle. Their long legs have four equal length toes with sharply curved talons on the end. One of these toes is reversible meaning the osprey can point it forward or backwards in order to catch and hold onto slippery fish. Like many species of birds, they have a third eyelid which acts as a pair of goggles to protect their eyes

whilst diving for fish and allowing them to see whilst underwater. Ospreys will sometimes dive from about 100 feet above the water, therefore, another adaptation to diving is that they are able to completely close their nostrils so to avoid water rushing up their nose when they hit the water. 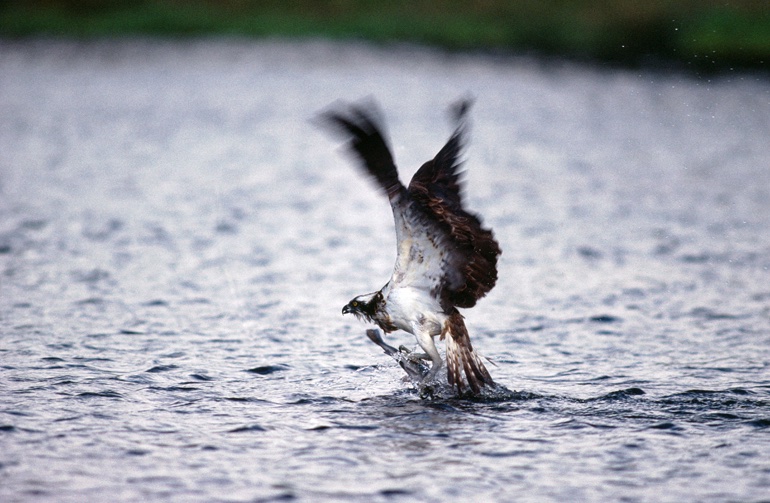 The Osprey is the world’s most widely distributed bird of prey, being found on every continent except from Antarctica due to its highly migratory lifecycle. The previously mentioned subspecies include the Eurasian subspecies (Pandion haliaetus haliaetus) which breeds Europe, North Africa and Asia – this includes a healthy population which will be found in Scotland between March and October. There are 200 to 250 pairs successfully breeding in the UK (making them rarer to see than golden eagles which have 440 pairs!). The population strong hold is in Scotland with many nests visible to the public on sites such as Loch Garten in Abernethy, the nest located in the Cairngorms has a live stream camera on it – the link to watch them can be found here https://www.rspb.org.uk/reserves-and-events/reserves-a-z/loch-garten/live-video-webcam/

Ospreys are largely monogamous and site faithful, each year using the same nest site and partner to reproduce. Their nests are very large, taking between 2-3 weeks to build, consisting of multiple large sticks and lined with moss, grass, and bark. The nests are often constructed at the top of conifers, but ospreys have also been seen to nest on artificial platforms, such as the one erected behind the loch at Aigas. When we built this platform, we consulted experts on how to build an osprey nest – so, we have completed the groundwork with the aim to entice a new osprey pair to settle here.

Once a pair have resettled on their nest it is time to lay the eggs. The females usually lay between 2-3 eggs in the second half of April, incubating each one for 37 days. Once the young hatch parental care is shared between the adults; the female incubating and directly feeding the chicks, and the male doing all the fishing for the female and chicks. The young fledge at around 53 days old, then remaining around the nest until they make the impressive journey back to warmer southern climates for the winter. The females leave first, followed by the males and then the juveniles last. Each bird migrates alone and travels its own route, stopping off to feed along the way whilst on this impressive journey to their wintering grounds in West Africa.

There are several interesting ecological relationships that include the osprey. As raptors, ospreys are important in controlling the number and overall health of prey species. This is significant in enclosed lochs and rivers due to their smaller fish populations. Historically it is said that osprey that lived in forested areas formed ecological relationships with beavers and relied upon their ability to build productive and suitable habitat. Beavers form shallow ponds by damming small water courses, these created productive fishing grounds for the osprey and often the trees flooded by beaver activity would make a brilliant nest location.

The osprey had been a staple raptor in the UK until its demise in the Victorian era whereby egg collecting and hunting for their skin meant they went extinct in the UK in 1840. The first pair to recolonise were of Scandinavian origin and bred on Loch Garten in 1959 and have been breeding there ever since. However, re-colonisation was hampered by the presence of organochlorine pesticides such as DDT. Due to their position at the top of the food chain the ospreys experienced bioaccumulation of DDT from their prey. This bioaccumulation led to decreased shell thickness resulting in increased incidence of the eggs being accidentally crushed or the eggs becoming rotten. Combined with the continued action of egg collectors this bioaccumulation meant that the osprey population really struggled to spread across the country, however DDT was banned in 1986 and the population has been on the rise ever since.

There are healthy osprey populations in our local area here at Aigas, with regular breeding pairs on the Redcastle estate and on the river Beauly, so it is only a matter of time till a pair decide to make their summer home on the Aigas loch!