Our night in the hide, there at the Aigas Field Centre in the Scottish Highlands, remains a high point in our recent Road Scholar tour. We gathered at about 8:00 p.m., five Road Scholars led by Charlie (Charlotte Gardener), one of the young women Rangers who led us quietly into the hide. It was a comfortable space. Three high, long benches faced the open viewing windows. The benches were padded and a shelf in front of windows allowed for resting elbows, forearms and, even, chins. We knew it would probably be a long wait and we got settled as quietly as possible.

I crossed my forearms comfortably on the shelf and watched Charlie as she seeded the viewing areas. We knew that pine martens, a relative of mink, otters and badgers, had a den nearby and had been known to wander this area. Charlie spread peanut butter along several of the horizontal branches in front of the hide, poured some peanuts into various crevices in other branches and made little peanut piles on top of some stumps, one of which was right in front of the hide and cut off at a height that was perfect for our viewing. She then rejoined us inside, reminding us again of the need for quiet.

“They know we are here, of course,” she said, “but any sudden noise can startle them into running.”

I looked out at the rocky hillside and tried to identify the areas from which a pine marten, or a badger, might come. Beavers had been introduced into the nearby loch, though we hadn’t seen them. Slowly I swept my eyes back and forth, looking for anything that moved. The silence deepened and soon that silence captured every bit of my attention.  There are levels of silence, just as there are levels of noise. I don’t exactly have words to describe it but one hears it, feels it, as the silence deepens. I could hear the gentle breathing of one or other of the watchers. I could hear nothing else although there were undoubtedly all kinds of rustling as creatures moved and settled and the wind muscled its way around the contours of the land. But inside the hide, the silence was complete.

For about forty minutes, I revelled in the silence, relishing its almost tangible quality as well as the tiny breathing noises that only seemed to enhance it. Then it began to pall. Silently I berated myself for an inability to maintain such stillness for any length of time. I strenuously rejected the temptation to open my iPad to the ebook I was reading.  I struggled to initiate various meditation techniques of breathing or silent chanting. Each strategy gave me five or ten minutes of grace (in two senses of the word).

Suddenly we all sat up. The silence was lightened but not broken by small gasps and the rustle of clothes. A pine marten had slipped out from under the hide and was tentatively approaching the web of branches, logs and stumps that had been turned into his buffet. He ate in greedy bursts, with eyes and ears sharply alert: gobble, gobble, then eyes up and darting from side to side. Gobble, gobble, then ears up and swivelling around. After a few minutes he seemed to relax ever so slightly and began licking the peanut butter off the length of one log. He turned to the peanuts and followed the invisible path that Charlie had laid down. First he dug out a few peanuts in a hole cut in a stump farthest from the hide. Next he ambled along a branch that had fallen beside the stump, digging out the hidden nuts with small, flexible fingers. Finally he clambered up the tall, slender stump that was closest to the hide. 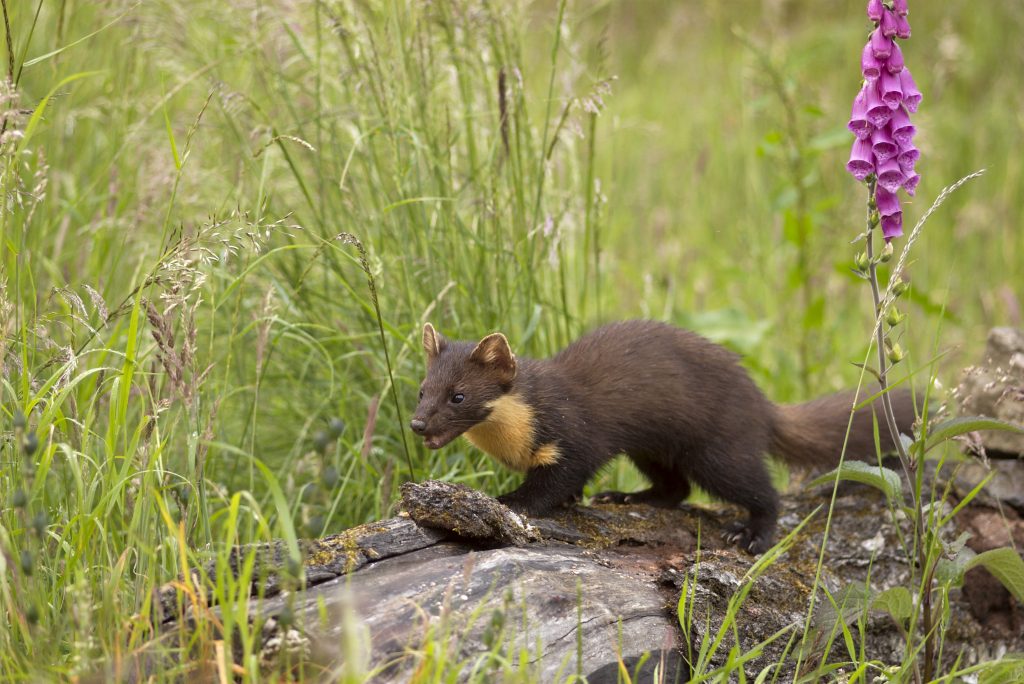 Cameras had been clicking throughout his progress along the buffet, sounds too small to alert him. He was absorbed n a small pile of nuts, picking up each one and gnawing away, when a small “ping” sounded  within the hide. I froze. A text was announcing itself on someone’s cell phone and I knew immediately that it was my husband’s. Instantly the pine marten jerked his head up and whipped around to stare fixedly into the hide. All breathing stopped and there were a few moments of stalemate. Perceiving no further threat, the pine marten returned to his nut pile and we returned to breathing. And to snapping pictures.

Soon, appetite sated, the pine marten loped off into the woods ahead and our night in the hide came to an end. I closed my eyes and waited for the recrimination that was sure to come. Charlie had been very insistent about the silence. But no. Before she could say anything, there was a round of praise for the guy whose phone had fortuitously pinged. It had given us our only front face shot of the pine marten. A good night was had by all.

*The hide is known as a blind in the U.S.