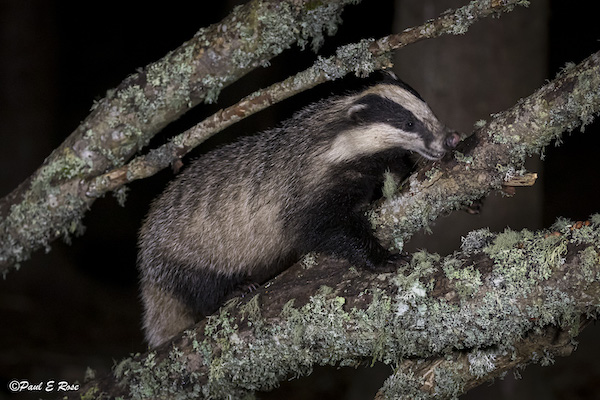 After a busy first couple of weeks on my placement at Aigas, going on days out along the West Coast spotting White-tailed eagles and looking after the wildcats, I was excited for my first hide visit. In preparation, I wrapped myself up in so many layers that I struggled to move; thermals, shirt, fleece, coat, snood and gloves. I’d spent the last two years studying Zoology at university in Cornwall and had definitely become used to a much warmer climate! I also spent at least 10 minutes putting my camera in and out of my bag and finally settled on leaving it behind: for my first hide visit I wanted to watch whatever appeared with my own eyes, not from behind a lens.

At 8.15pm, Tay and I headed out to meet the Autumn Birds group to take them up to the Campbell Hide. They were particularly keen to see pine martens. I had only ever seen pine martens and badgers on documentaries, so I was just happy to see anything that wanted to show its face! We settled into the hide whilst Tay put out peanuts and honey, holding our breaths and desperately trying not to rustle our coats. We waited patiently, tawny owls hooting all around us – and what came next was definitely worth the wait.

At 9.15pm we had our first hungry visitor. The evasive pine marten! This little fellow, with his sleek, chocolatey coat and creamy bib, climbed elegantly up the branches in front of the hide. He concentrated purely on licking up the honey, undisturbed by the muffled chuckles coming from his pleased audience. He was very efficient. Within two minutes he’d had his fill and had sneaked back into the forest. We settled back down and hoped for another furry visitor. 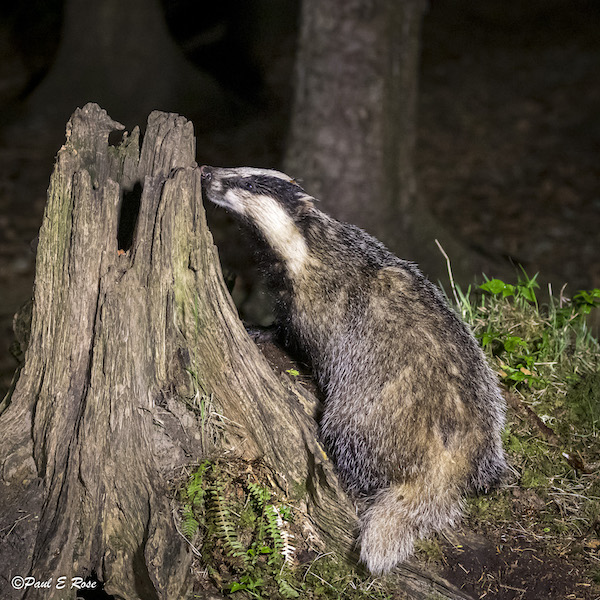 After a short while, a snuffling sound began, getting louder and louder, approaching from the right. Ever since I have arrived at Aigas, the rangers have spoken of a particularly greedy female badger with a pink nose, who had affectionately been nicknamed Pinky. A slender black and white striped face with a pink nose trundled into view followed by a plump body and a white tufty tail. This had to be Pinky and it seemed that she had her mind set on the peanuts – all of the peanuts. First, she took the easy bait. She ambled around the tree stumps and lower branches, hoovering up peanuts and snuffling in the soil for other pickings. Then she noticed the peanuts placed higher up; the ones meant for pine martens. She began the climb and wedged herself snuggly between a tree trunk and a branch. She had definitely earned her greedy reputation! Once the peanuts there were gone, she scurried over to the base of the main apparatus and began climbing up the branch, inching closer and closer to the top, stopping every now and then to lick up any honey left by the pine marten. Clearly the pine marten’s feeding habits weren’t as thorough as Pinky’s. Nearing the top, it seemed that her sense of danger suddenly kicked in. She gave a longing glance at the peanuts on the highest point of the branch and, unwillingly, began to climb back down to ground level. Content that she had eaten every last morsel that she could reach, Pinky made her way, snuffling, back into the forest. She had completely charmed all of us; I understand why she is a ranger favourite! 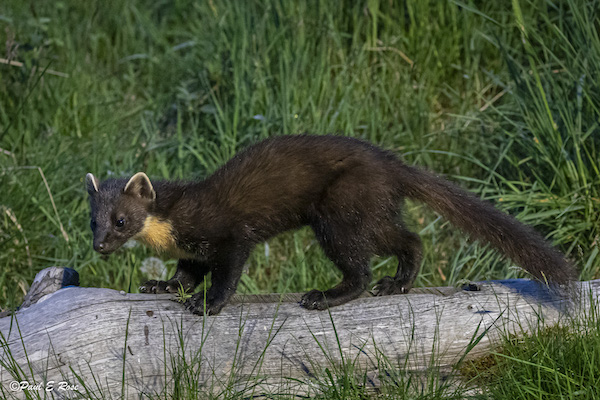 Thinking that we’d seen all that was on offer that night, a pair of glistening eyes suddenly stared out from the darkness. I stared back. Cautiously, the mysterious creature to whom they belonged crept towards us, eyes growing bigger with every step. A sly pine marten slinked out into the light and allowed us a teasing glimpse before darting into the forest behind the hide. Content, I looked around at the satisfied smiles and tired eyes around me. Pinky and the Pine Martens had put on a great show. We would all sleep happy tonight!