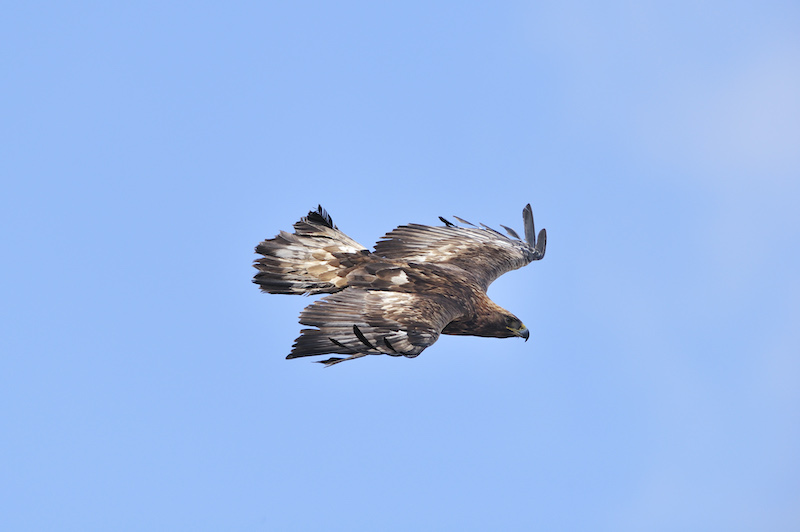 In the Scottish Highlands, we are lucky enough to be surrounded by so many species of bird, some widespread throughout Britain, and some heavily restricted to the North of Scotland. Some of the largest, and most majestic of these birds are our eagles. In Scotland, there are two species of eagle – the White-tailed Eagle, and the Golden Eagle, and it is a privilege to see both of these species regularly when guiding guests in the Highlands.

With the longest wingspan of any eagle in the world, an average of 219cm and a maximum of 253cm, the White-tailed Eagle is often described as a ‘flying barn door’. It hasn’t always been easy to see White-tailed Eagles in Scotland, with a huge amount of illegal hunting rendering this previously fairly common British breeder extinct in 1918. However, after small-scale attempts to reintroduce these eagles in Argyll and Fair Isle in 1968, 82 individuals were reintroduced to the island of Rum between 1975 and 1985. Coming from Norway, where the White-tailed Eagle population currently stands at over 2,000 pairs, these eagles alongside 58 more introduced into the Wester Ross region of Scotland in 1990s successfully became Britain’s first self-sustaining population since 1918. Now, the population has recovered to over 100 breeding pairs in Scotland, with further birds in Ireland and the Isle of Wight, and more introductions planned. Despite some illegal killings, often by farmers seeing a perceived risk to their livestock, there is hope of White-tailed Eagles becoming more numerous and widespread in the British Isles in the near future. White-tailed Eagles have a varied diet, catching live prey such as fish, birds and hares, but also feeding on carrion.

With a wingspan of between 204 and 220cm, the Golden Eagle is one of the most spectacular birds of the straths, glens and mountains in Scotland. Whilst they are widespread throughout the Northern Hemisphere, they, like White-tailed Eagles suffered from huge population declines in the 19th and early 20th centuries. The Golden Eagle went extinct in England and Wales by 1850 and Ireland by 1912 due to illegal hunting, but persisted in small numbers in Scotland. Despite further threats from organochloride pesticides in the 1950s and 1960s, numbers of this species have steadily increased to our current population of around 440 pairs. Almost all of these are in the Scottish Highlands or the Outer Hebrides, so we are in a fantastic position to see Golden Eagles on a very regular basis. Much like White-tailed Eagles, Golden Eagles have an incredibly varied diet, with most live prey consisting of medium sized mammals such as hares, and birds such as grouse. However, they also eat lots of carrion.

I have been lucky enough to have many incredible encounters with eagles during my short time in the Scottish Highlands. Eagles are invariably near the top of many guests’ wish lists, so we visit many places with a good chance of seeing them. The first time I ever saw a Golden Eagle was on my second day here at Aigas. Myself and some of the other staff at the Field Centre drove the short distance to Glen Strathfarrar, and found two Golden Eagles very quickly. I

picked up the first individual perched on a rock high up a hill, but soon, both were in the air, circling. This was a distant sighting, and as quickly as they appeared, they were gone, but it was enough for me to immediately fall in love with eagles.

I had seen White-tailed Eagles once previously, during a family trip to Scotland many years ago, but couldn’t wait to see them again. My first encounter with this amazing species since I started working at Aigas was just a few days after the Golden Eagle sighting, in September 2021. At Shieldaig, on the west coast of the Highlands, a young eagle born that year was visible on a small island, calling frequently from a tree. Whilst this bird never flew, it’s sheer size was obvious when compared to the corvids nearby. I was very excited to see my first White-tailed Eagle in recent memory, but couldn’t wait to see their full majesty with some flight views.

Over the next two months, I was lucky enough to see Golden and White-tailed Eagles on many further occasions, but one particular day in early November stands out in my memory. It was a sunny, still late Autumn day, and myself and the other academic placement students were out with wildlife guide Jonathan Willet on a ranger training day in Strathdearn. Whilst watching a flock of Bramblings, with a few Buzzards circling nearby, a monstrous shape appeared out of nowhere. It was a juvenile White-tailed Eagle, and it proceeded to offer point blank views as it powered over the heathland in front of us, came to within a matter of metres, then banked up and drifted off into the distance. This was the closest I had ever been to an eagle, and was an absolutely mind-blowing experience. From that moment onwards, we couldn’t stay away from eagles. We had at least ten sightings of Golden Eagles, with two in particular standing out in my memory as they displayed to each other fairly low in the sky above our heads. As dusk approached, we had just been treated to spectacular views of another of my favourite birds of prey, a Goshawk, when two eagles appeared over a distant hillside. A quick look through binoculars identified these as one Golden Eagle and one White-tailed Eagle. These two birds drifted slowly past, offering fantastic views, and providing a fitting end to a special day.

Despite all of these sightings, I have definitely not had my fill of eagles. Golden Eagles have been observed by other rangers chasing Red Deer off rocky hillsides to prey on them if they stumble to their deaths, and this stunning hunting technique is something I would love to see. I can honestly say that I will never get bored of seeing eagles.