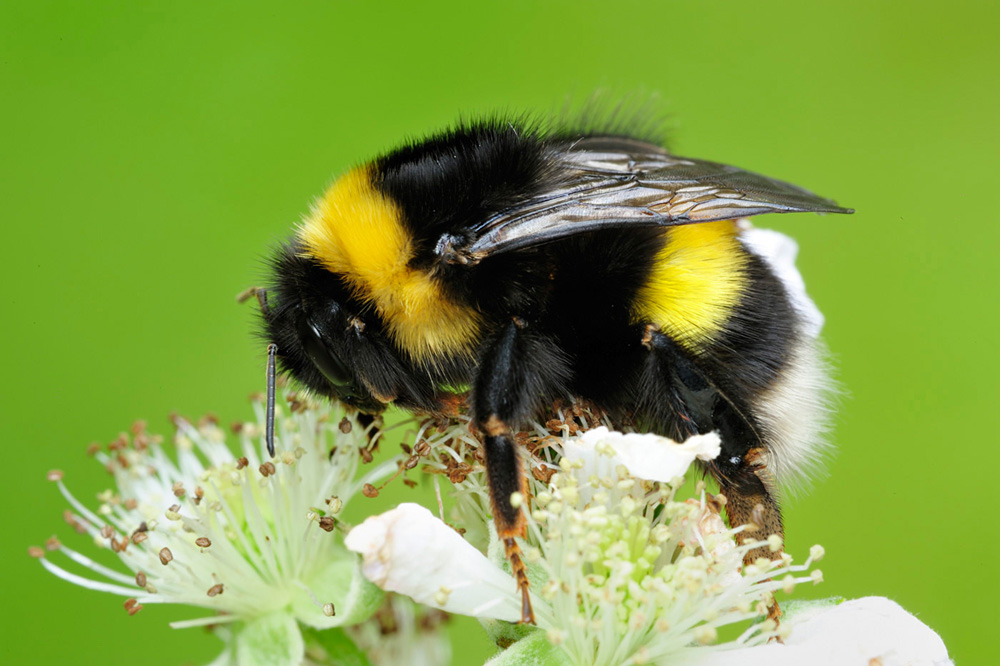 After a bout of warm, sunny weather around Aigas the first signs of spring have been eagerly welcomed by many of us here at the field centre. Peacock butterflies and red admirals have been spotted flying over newly flowering daffodils, and with each passing week, more and more moth species are finding their way into our moth traps. Another way marker that spring is getting going comes with the emergence of our bumblebees. There are seventeen species of bumblebee that can be found in the Highlands: thirteen of which live in social colonies, and four parasitic cuckoo bumblebee species. Some of the first bumblebees to be spotted include the early bumblebee, emerging between March and May, as well as the white-tailed and buff-tailed bumblebees which emerge from March onwards. At these early stages of spring, these bumblebee sightings will be of the queen bumblebees as they emerge from winter hibernation.

Like honeybees, many bumblebee species (but not all) are social, comprising of up to 400 individuals. Bumblebee colonies will mostly nest underground, for example in abandoned rodent burrows. These nests have a much less rigid, more irregular structure compared to the hives of honeybees; with the wax cups they build crammed into whichever space available to the bees. Within the nest there are three labour divisions – or castes – of bumblebee: the queen, the workers and the drones.

Queens are the largest individuals in the nest as they are fed much more during their brood stage compared to workers. There will be one queen within the nest, and she is responsible for the reproductive output of the hive. Her main responsibility is to lay eggs to provide workers, drones and, at the end of the nest’s lifecycle, more queen bees. Most of the bumblebee colony is made up of the worker bees. These are all females and are responsible for the running of the nest. Workers will take care of brood, ensure the nest is clean and tidy, defend the nest site, they feed and clean the queen, as well as forage for nectar. Workers are not responsible for laying eggs (though, it is not impossible for them to do so – more on that later!) and even have under-developed reproductive organs which makes it impossible for them to lay female brood. This is because all female bumblebees – queen and worker alike – require eggs to be fertilised. Workers do not have the reproductive tissue to store sperm and therefore fertilisation cannot occur. However, male bumblebees, also known as drones, have half the genetic content compared to females and are produced from unfertilised eggs. Drones have a small, but still significant, role within the lifecycle of a bumblebee colony: to mate with new queens before winter. Unlike male honeybees, drones from bumblebee colonies do not die during copulation, allowing them, on occasion, to mate with multiple queens. However, they do not survive for very long and will die in the autumn.

The majority of the bumblebee colony will die during the autumn and beginning of winter, including the workers, drones and the founding queen. In fact, it is only the new queens, laid over the summer, that will hibernate for the winter. Just before going into hibernation, this newly mated queens will build up their fat stores to get them through the long, cold winter ahead. By the time spring comes round, as it has now, these queens will emerge and set back to foraging so that they can build up enough energy to found a colony of their own. The first task of establishing a colony is finding a suitable nest location and gathering pollen reserves that will feed the first set of brood. Next comes building the work force. Queens will lay fertilised eggs, using sperm stored from the previous year’s matings, which will develop into the worker bees responsible for the running of the nest. During the incubation of the first set of brood, the queen is solely responsible for keeping the brood warm, and then, when the larvae are ready to emerge from the eggs, the queen must gather nectar to keep them well fed. After these worker larvae have developed into adults, the brunt of the work leaves the queen and falls to these new worker bumblebees, allowing her to focus on the laying the next round of eggs. From this point onwards, the queen does not leave her nest.

Come summer, when the workforce has built up to a healthy number, the queen will move on from laying workers and instead begin laying unfertilised eggs to produce drones. Once the drones have developed fully into adults, they will usually leave the colony and do not return. This process of drone production is the first stage of the end of the colony’s life. After the queen has begun to produce

drones, she will not return to producing more worker bumblebees. Even when she begins relaying fertilised eggs, she has stopped producing the pheromone that signals to workers that the eggs should be fed less to produce more worker bumblebees. Therefore, in this period of egg laying, the brood are fed more, which enables them to grow bigger and, as such, their reproductive organs are able to fully develop. It is then on the teeny tiny shoulders that the genetic future of the colony rests.

New queens will leave the hive and venture out on their own. Their first mission: mating. Drones from other colonies will compete with one another to mate with a queen. As the drone’s sole purpose in life is to mate with a queen, it is an unfortunate truth for them that most will not be successful. However, once those lucky few have provided the new queens with sperm for the next year, these queens have more important matters to attend to. The young queens must spend the last part of summer building up fat stores to get them through winter hibernation. And thus, the cycle can begin again.

Like all things, however, life is not always so straight forward. Even within the colony of bumblebees, conflict can be found. One minor conflict occurs between the queen and her humble workers. Whilst the queen is responsible for near all egg-laying, it is not impossible for workers to lay their own eggs. These eggs cannot be fertilised, as the workers have never been mated with, and so all worker-produced brood are males. This is a benefit to them as these workers will be more related to their sons than their queen-laid brothers. As such, they reap more genetic benefits if their sons go on to mate with the next generation of queens. The queen, however, is not a fan of such blatant insubordination as she shares less genetic content with her grandsons than she does with her sons. Therefore, any sign of workers laying their own eggs is met with swift and harsh retribution. Workers that are found laying eggs will be given a harsh scolding and the worker-laid eggs are eaten by the queen. Such behaviour can be seen in this amazing video by Ryan Brock on Twitter (@RBrock94): pic.twitter.com/AHop2WIBvD

Cool example of kin conflict in one of my Tree Bumblebee colonies. Here, the queen catches worker #3 laying eggs and gives her a rather nasty telling off. pic.twitter.com/AHop2WIBvD