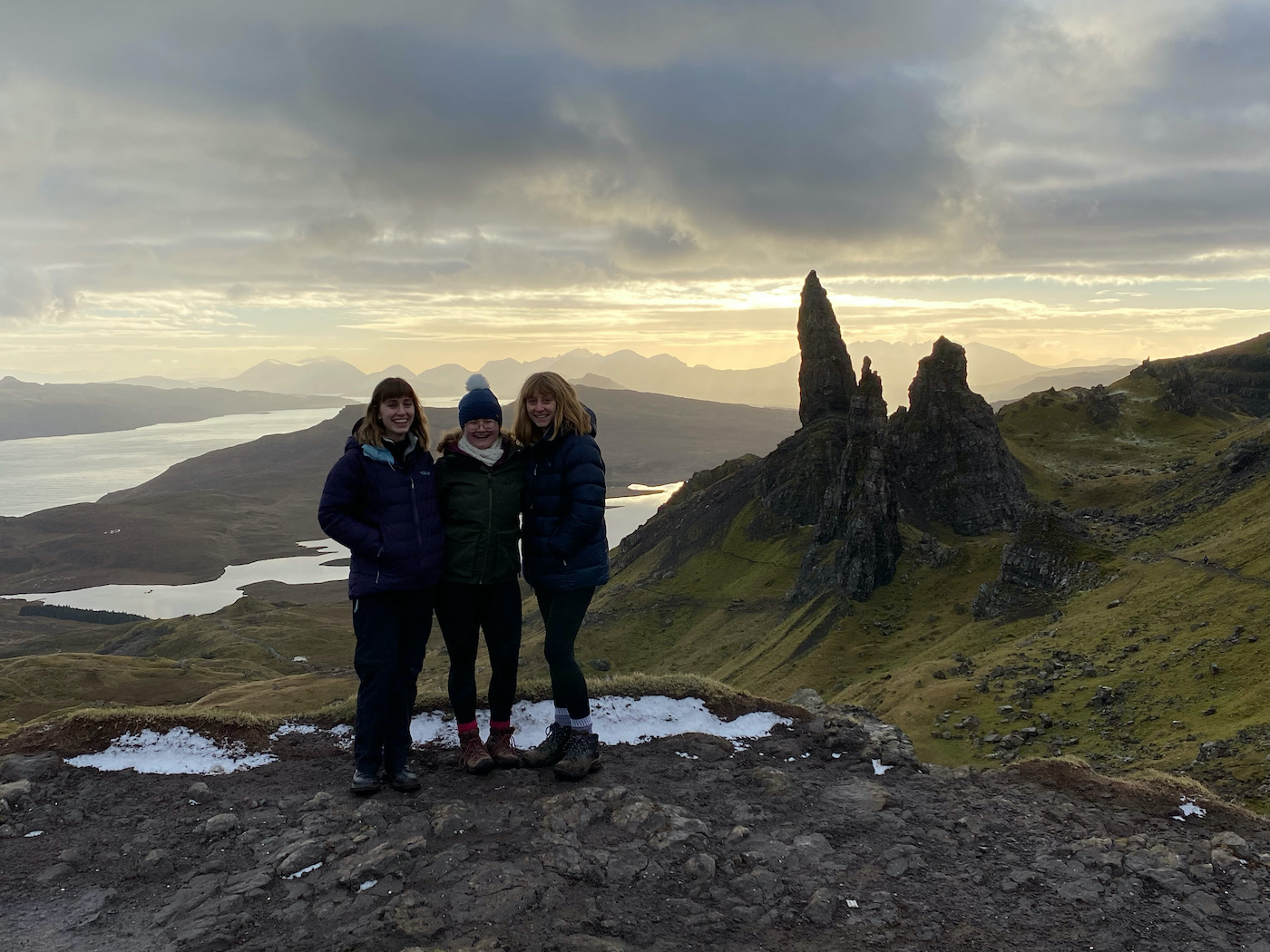 On a chilly weekend before Christmas, our Academic Placements, Eliane, Josephine and Lucy, decided to wake up very early (against their better judgement) to go and explore the Old Man of Storr in the north of the Isle of Skye.

The largest island of the Inner Hebrides, the Isle of Skye is iconic for its history. Inhabited by Scots, who originally came over from Ireland, from the 1st century BCE and later by Norse peoples between 800 and 1263 AD, the human history of Skye is extensive. In more recent history it was the safe-haven for Bonnie Prince Charlie following the defeat of his Jacobite army at the Battle of Culloden on the 16th April 1746. This bid for freedom has often been romanticised, although it probably felt like a loss of dignity and power to the Prince himself; Prince Charlie had to dress up as Betty Burke, the Irish spinning maid of Flora MacDonald, in order to survive the boat journey undetected. Once on Skye, he travelled to Portree, near to the Old Man of Storr, and from there he took a boat to Raasay where he was rescued by a French ship.

Additionally, the geology of north Skye is fascinating. The Old Man of Storr is a remnant of the volcanic activity that forged the Isle of Skye around 2,800 million years ago. The 55m tall rock column is actually a volcanic plug, a volcanic plug being formed when magma within a volcanic vent cools and sets. The land surrounding the Old Man slopes down rather rapidly as a result of basalt lava landslides from these volcanoes, which caused the Jurassic sedimentary rock below to collapse. As a result, our APs had to prepare for a steep scramble up to this Old Man who had lived through so much.

Setting off at 7am, we were sleepy-eyed and thick-headed when the car pulled out of Aigas. We have since been informed that we will be getting up much earlier during ranger training and during the season to go and see otters and capercaillie and, therefore, we have agreed that coffee will be vital for surviving our year at Aigas. Luckily, Fleetwood Mac soon had us feeling more awake and we felt excited to be setting off on an adventure.

We arrived at the Old Man of Storr ready and rearing to go, each one of us wrapped head to toe in many layers to fight off the biting chill. Sensible. You don’t want to get cold when climbing and exposed to the elements. Or at least we thought… Ten minutes in and we were sweating like pigs in blankets and had to put our precious layers into our bags, making walking a lot easier despite our bags being much heavier. As we continued up the path we stopped, in awe, every ten minutes or so; the scenery was simply breath-taking. The Old Man of Storr really felt ancient and ethereal, and we were so amazed that we had the chance to walk up to him.

Around midday we had finished the scramble up and had reached the viewing platform. Lunchtime, great! Starving, we tucked into our packed lunches and took many photos whilst appreciating the epic view. However, taking this time to relax made us realise just how cold it truly was once we had stopped moving. All those layers we had crumpled back into our bags came straight back out again. Nevertheless, we were lucky that our lunch spot on the Isle of Skye, often considered one of the windiest places in the UK, was windless and serene. We couldn’t have picked a better day. Or better company; the Old Man of Storr was an impressive host.

Aware that the days had grown short and we had a long car journey home ahead of us, we made our way down. The dark basalt mud underneath wasn’t forgiving; every time a foot went down it sank or slipped, making our descent look like a comedy sketch. Aching yet satisfied, we all made it back to the car in one piece, looking forward to a cake stop on the long drive home.

The Old Man of Storr and the Isle of Skye had given us a day of adventure. We’ll definitely be back to explore more of Skye during our time up here at Aigas!

Words and picture by Lucy Smith