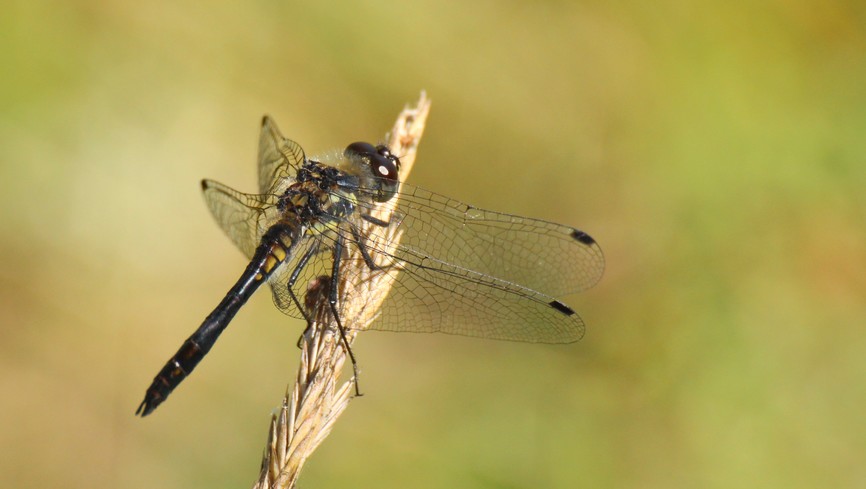 Back in July the Aigas Loch was alive with fast, beautiful, prehistoric predators of the air. Their ancestors with 70cm wingspans were the largest creatures in the air 300 million years ago.

Dragonflies are a pleasure to watch wherever you are in the world. Some people dub them the new birds with their rise in popularity amongst twitchers. Dragonflies don’t call or sing to give away their presence however their 2 sets wings beat at around 30 times a second often making an audible hum which draws your attention.

Our world is home to 5,900 species of dragonfly, we have 45 of them living in Great Britain & Ireland, 11 of which feed and breed on the Aigas estate. A stroll along the back of the loch on a warm day in summer will reveal most if not all the resident species of the Odonata (toothed jaws) order living here.

This year we carried out thorough surveys across the mosaic of habitats that cover the estate and found 4 species belonging to the Suborder; Zygoptera (Paired wings) which are more commonly known as damselflies. The other 7 species we found belong to the Suborder; Anisotera (Different wings), these are the larger creatures which we all know as dragonflies.

Dragonflies are predators. They hunt as larvae in the freshwater environment and on the wing as adults. Ideal prey for adult dragonflies comes in the form of small flies, midges (Hooray!!!) and even smaller dragonflies…

It was a sunny day in mid July when me, Danny (Seasonal ranger) and Charlie (Education officer) headed to the west end of the loch to survey the life colonising the beaver pools. As we walked through the tall vegetation, our gaze was drawn to a small dragonfly on the wing. We watched the black darter female as she darted low between the bog myrtle stands when from above swept in something much larger. In the next moment a loud smack could be heard and two shapes became one, hurtling to the ground. We turned to each other in awe and went in search of the crash site. ‘Over here!’ Charlie shouted, me and Danny were there in seconds and crouched down to get a closer view of what she had found. The black darter female was dead and in the grasp of a golden-ringed dragonfly (The largest species to be found in Scotland). The golden-ringed dragonfly proceeded to feed undeterred by our presence her large toothed jaws opening and closing in a slow, satisfying rhythm, so we sat, observed and pondered what life would be like as a small winged invertebrate living on the west end of the loch.