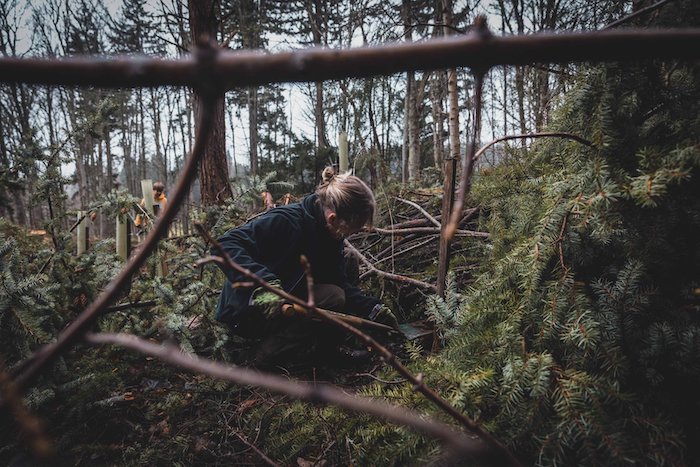 Bordering our Field Centre is an undulating, 260ha community owned patch of woodland – Aigas Community Forest. Bought with the aims of increasing biodiversity in areas of previously poorly managed plantation; it demonstrates sustainable timber sourcing, whilst providing a fantastic recreational area for the public. Aigas Field Centre has deep links with the community forest and is strongly supportive of its missions, helping to buy it over in 2015. Two of our members of staff are on the committee board and help to shape decisions regarding its management.

Over the winter months we have been carrying out surveys around the forest to scout out areas with higher value for wildlife, such as crested tits, in order to install nest boxes and map out sections for forestry works to steer clear of in coming years. Naturedays have also utilized the forest as an excellent, and highly effective teaching resource, alongside the help of Helge, the forest manager. I recently took part in an enriching day out the forest with the local primary school. Thanks to the high species variation across the site, we were able to cover a variety of topics; seasonal changes, animal homes, and biodiversity in plantation versus native woodland, to name a few. The children also made some creative, Andy Goldsworthy inspired natural artwork, and toasted marshmallows; this, of course, went down a treat!

Towards the end of last month, the 24th of November, the community forest hosted a tree planting morning. This celebrated National Tree Week; the start of the winter tree planting season. A modest collection of volunteers gathered to spend a crisp, frost glazed Saturday morning planting over 200 trees. We planted a huge variety of mainly deciduous, wildlife enhancing natives including; Ash, Hawthorne, Silver Birch, Aspen, Rowan along with some Juniper and Scots Pine. You can’t help but feel an enormous sense of satisfaction and purpose with every sapling that you help to tuck snuggly into the soil, with the knowledge that each has great potential for wildlife. Hopefully one day I can return to see the saplings that we planted matured into a thriving woodland community.

Native woodlands currently make up less than 5% of Scotland’s land use. Although reforesting is on the rise, much of our wildlife is still struggling in the fragmented mosaic of habitat available. We have been replanting native species around our own field centre grounds, with a focus on returning some of the vast swathes of bracken to richer habitats of native forest climax communities; forests that will support much of Scotland’s declining flora and fauna.