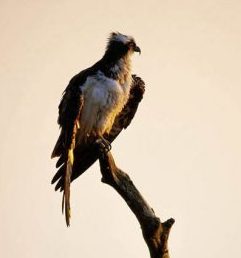 Last week I was lucky enough to see two ospreys perching by the Aigas Loch. It was 6am and the loch was very peaceful, just myself and one of our guests. We were able to watch the ospreys gliding and perching for an hour. I was even able to take an extremely blurry photo. This was such a special experience as the ospreys will be leaving for their migration to Africa very soon. Their route will most likely take them south over England, France and Spain, then crossing over Gibraltar before they fly down the western coast of Africa where they will spend the winter.

I had fully expected this to be my last great view of ospreys for a while. However, the next day I was lucky enough to see three more on the River Beauly while out with our Education Officer. They can initially look very like gulls when flying, but their high pitched call gives them away. Unfortunately, a very heavy downpour of rain forced us to retreat to the car!

It has been reported that ospreys from other areas in Scotland, e.g. Loch of the Lowes, have begun on their migration already. Females do tend to leave before the male and offspring, who follow on later. It’s also thought that family groups do not meet up when they are in Africa. Hopefully we’ll be lucky enough to experience morel lovely views in the coming days before these amazing creatures head south!