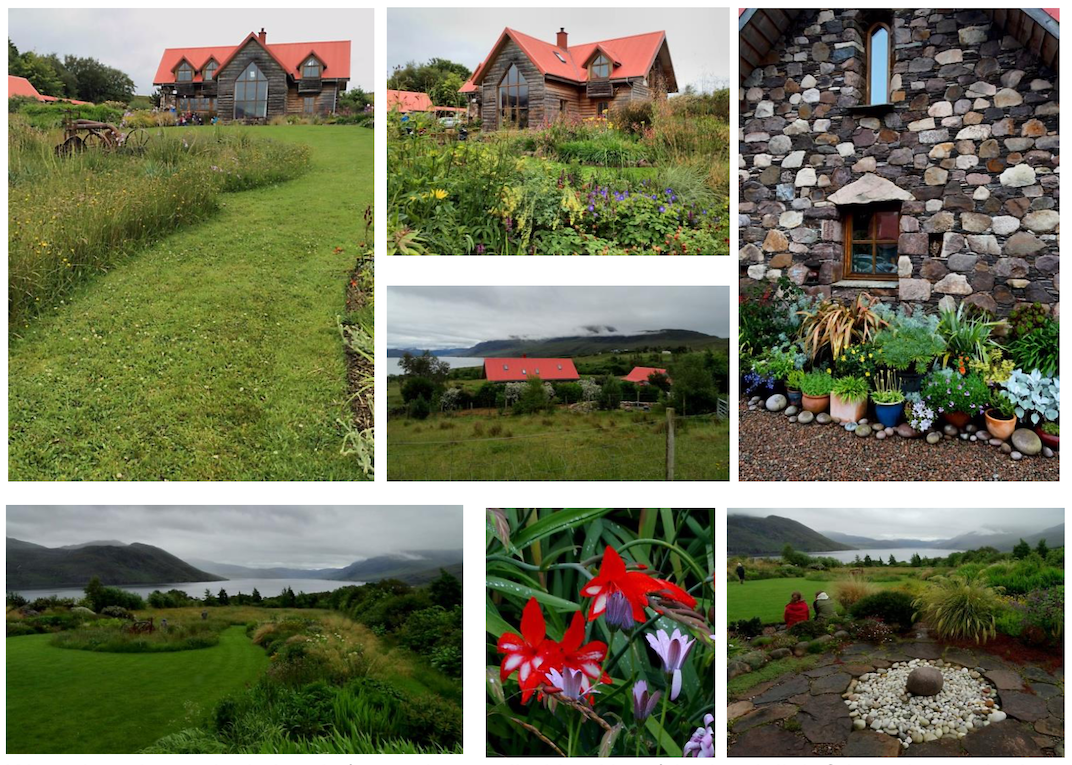 This was our first visit, excitement and eagerness increasing as the time for our drive north approached. We had no hesitation in making an early start, to allow a leisurely drive with stops but still getting to Aigas for settling in before the afternoon tea. The baronial Aigas mansion welcomed us as we drove up the drive to be met by one of the rangers who showed us to the cottage with common lounge where we would be spending the week. Excellently appointed, with everything we could want and we managed to get some unpacking done and clothes hung up before it was time for afternoon coffee/tea and cakes and formal welcome. We already had our programme for the week, printed out and left in our room, guests having selected their preferred theme when making their bookings. Lady Lucy welcomed us, introducing us to some of the rangers and explaining the outline of each day, starting with tea/coffee before breakfast at 8am, lunch, mostly provided packed for enjoying out in the field, and nominal return at about 4.30pm when there would be refreshments. Drinks served before the evening meal with coffee and tea afterwards, provided opportunities to share experiences with other guests.

First, a few general comments: Did the week meet expectation? Yes, and more so, from the warm welcome on arrival through the varied programme, clearly arranged with much forethought and attention to detail, with depth and breadth of coverage, which took us from Aigas west, north, east and south as shown on the map above. It was very special being taken around gardens by the owners and those responsible for their design and gardening, starting with Lady Lucy showing us around the Aigas gardens she created with her family. Lady Lucy took us to many of these, and we also benefited from the expert rangers, knowledgeable about the flowers but also about the wildlife from insects to birds in the sky – and gentle with those for whom much of the details were new. ‘John, do you remember what that is called’, the ranger asked gently, pointing to ground-layer wildflowers. ‘I know you told me yesterday’, I replied, but need to be reminded. ‘Think of your mouth, your taste’ she gently encouraged, guiding me to the name, Biting Stonecrop. Later in the week she offered to go through my photos, clarifying the names of the plants, which she and a colleague did one afternoon after our return to Aigas. We also learnt about the geology: a new term and concept for me, ‘isostatic rebound’, the rise of land mass after the melting of the heavy ice layers, still causing millimetre rises in the land about us. (Again, I had to be reminded of the phrase.) Further north on the west we were to learn about the Loch Maree fault and the geology of that area. All whilst enjoying the flowers, wild and cultivated.

A full programme, carefully planned and beautifully executed, supported by very tasty, filling and nutritious food, both at Aigas and in our individual lunch bags. And we were supported by the very comfortable accommodation, waking up fresh for the next days adventures and explorations. Evenings provided opportunities for visiting hides, the pine- marten with a ranger – and yes, I did see two. At the Loch Aigas hide I saw lots of midges and some fish jumping, but no beaver, otter or osprey – all seen by other guests. But as I enjoyed the quiet from the hide I slowly appreciated more and more the peace and tranquillity of the scene, the opportunity to stop and be. On one evening we were privileged to hear Sir John talking about and reading from ‘Nature’s Child’ – I have still to read, but two family members have read it since our return, thoroughly enjoyed.

We were shown around Aigas first by Lady Lucy, a privilege as she related how she had developed the garden, her children involved in its transformation. We were told about the historical development of the house over several centuries. The garden is an exciting blend of trees, lawns and flowers, with the landscape vistas and paths leading to enchanting rooms and areas in the garden. Every garden needs to include different rooms, which sadly our square back garden at home lacks.

Glen Strathfarrar, to the west of Aigas, follows the River Farrar, the road starting through forested areas, including native Scots pine, before opening up into the wider plane. Our ranger explained the difference between ‘glen’ and
‘strath’, briefly a glen having steeper sides. 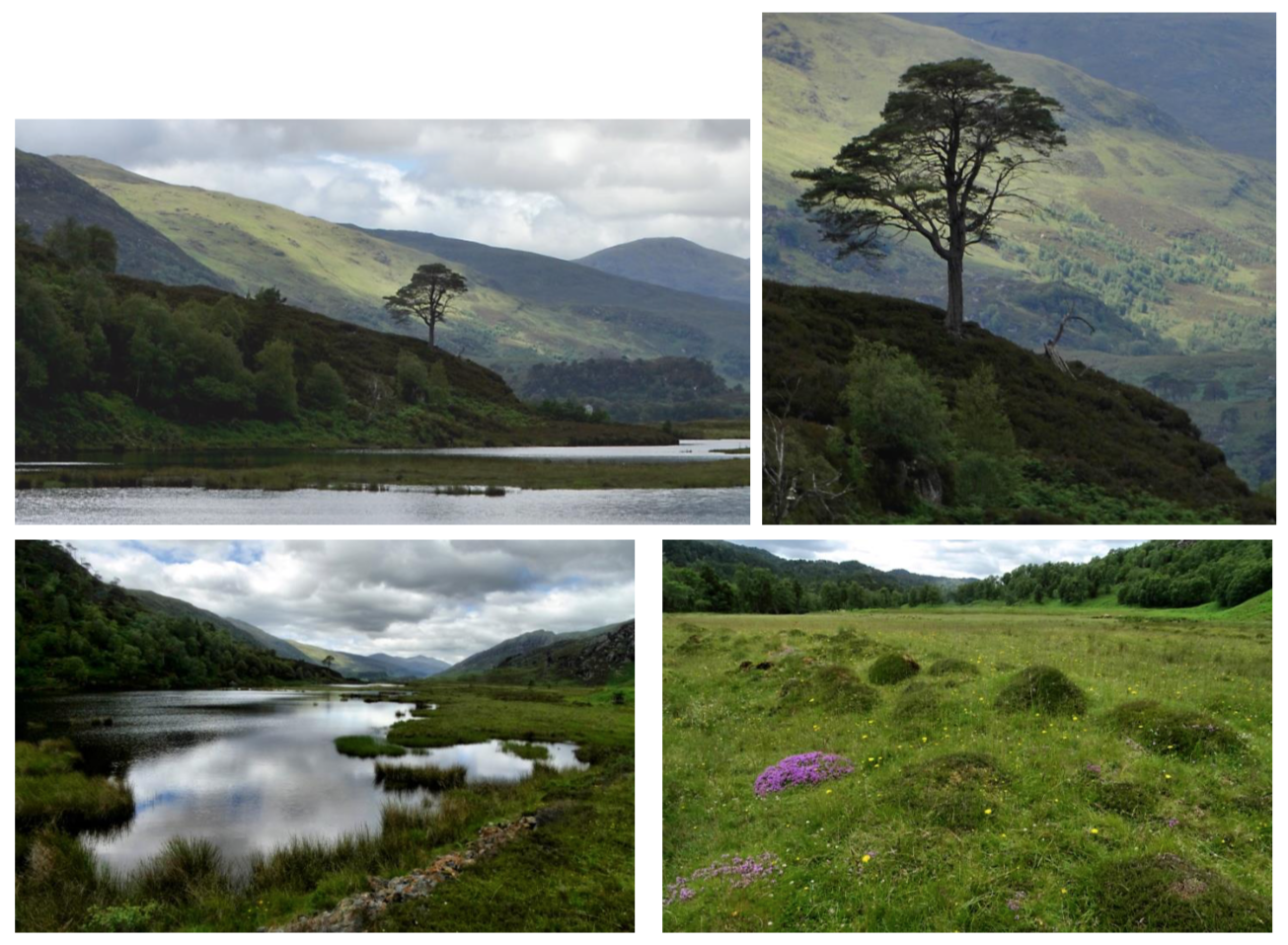 The photographs above show the upper parts of Strathfarrar, that on the lower right with a number of ant heaps. Before reaching there we were introduced to the many varied wild flowers amongst the trees. Let’s stop here, suggested the ranger, and explore. I was astounded by the rich diversity of wild flowers that ordinarily I would have past by – a few shown below.

The Loch Fleet Nature Reserve on the west coast, between Dornoch and Golspie, was our focus for Monday. Our first stop was the Mound, a 1000 feet earthen causeway designed by Thomas Telford in the 1810s to cross Loch Fleet. 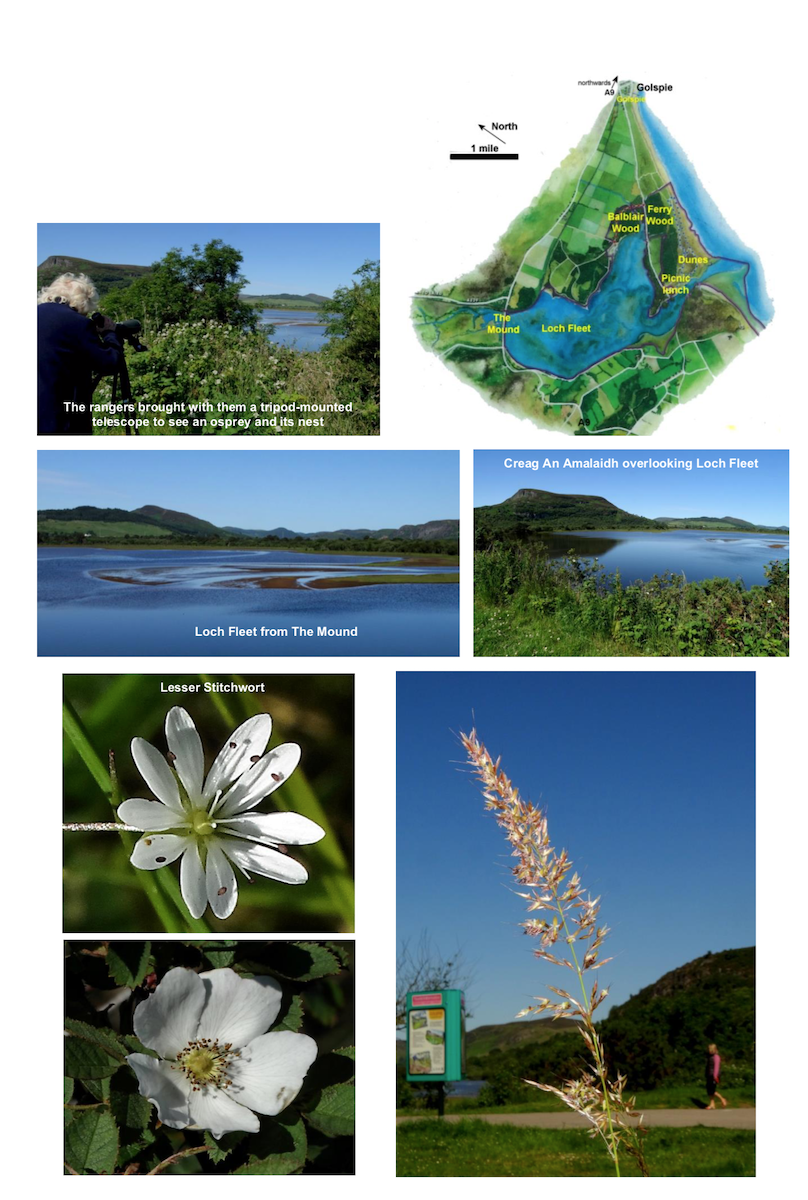 From The Mound we moved to Balblair Wood where many treasures were revealed on the forest floor, so easily unnoticed, walking past. 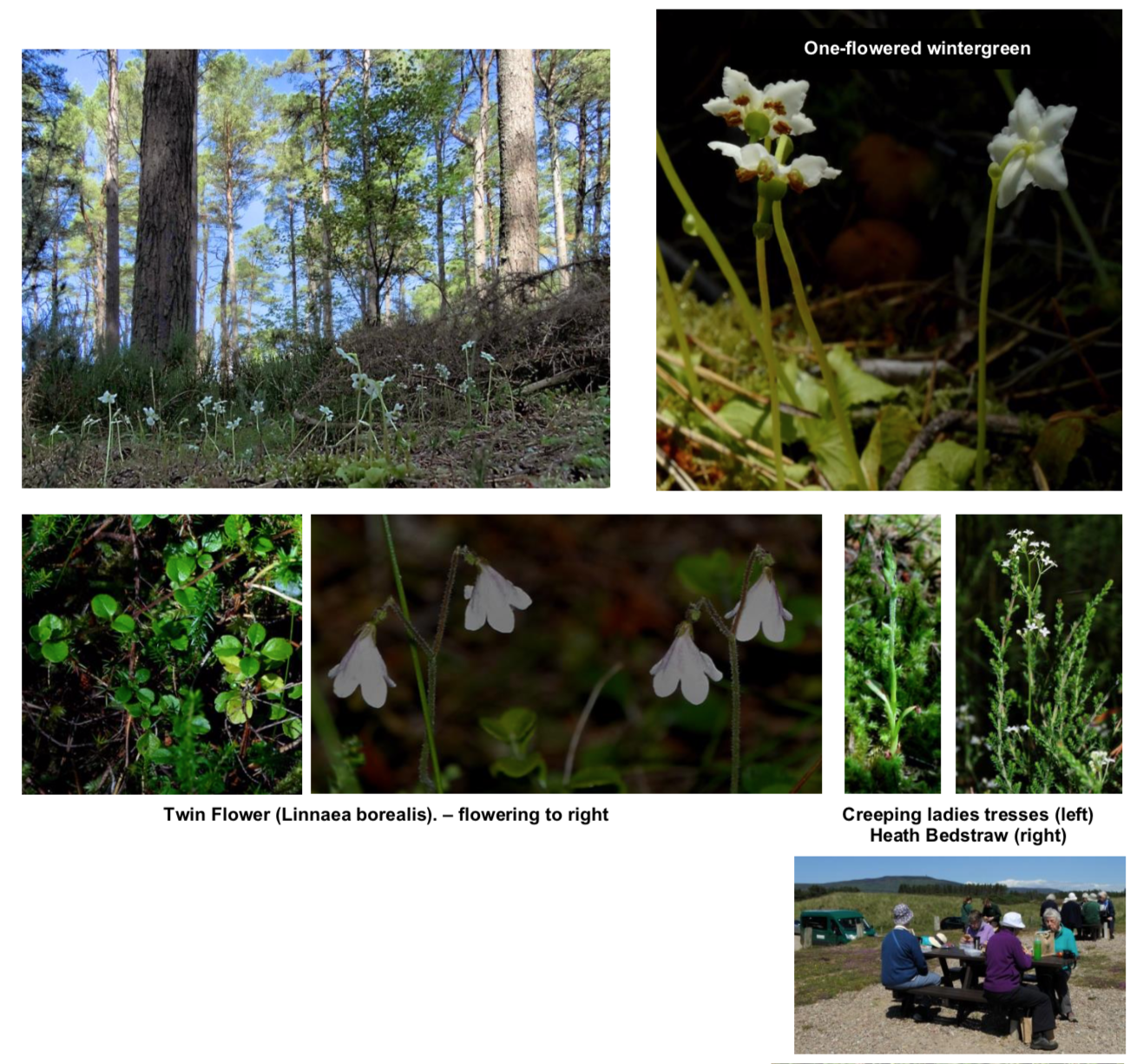 Lunch was beckoning, so we headed to the picnic spot at Littleferry (marked as ‘Lunch’ on the Loch Fleet map above). The picnic tables are at the car-park, adjacent to the dunes and coast. Whilst we ate from our neat (Aigas supplied) picnic carriers, the rangers prepared tea and coffee for us. 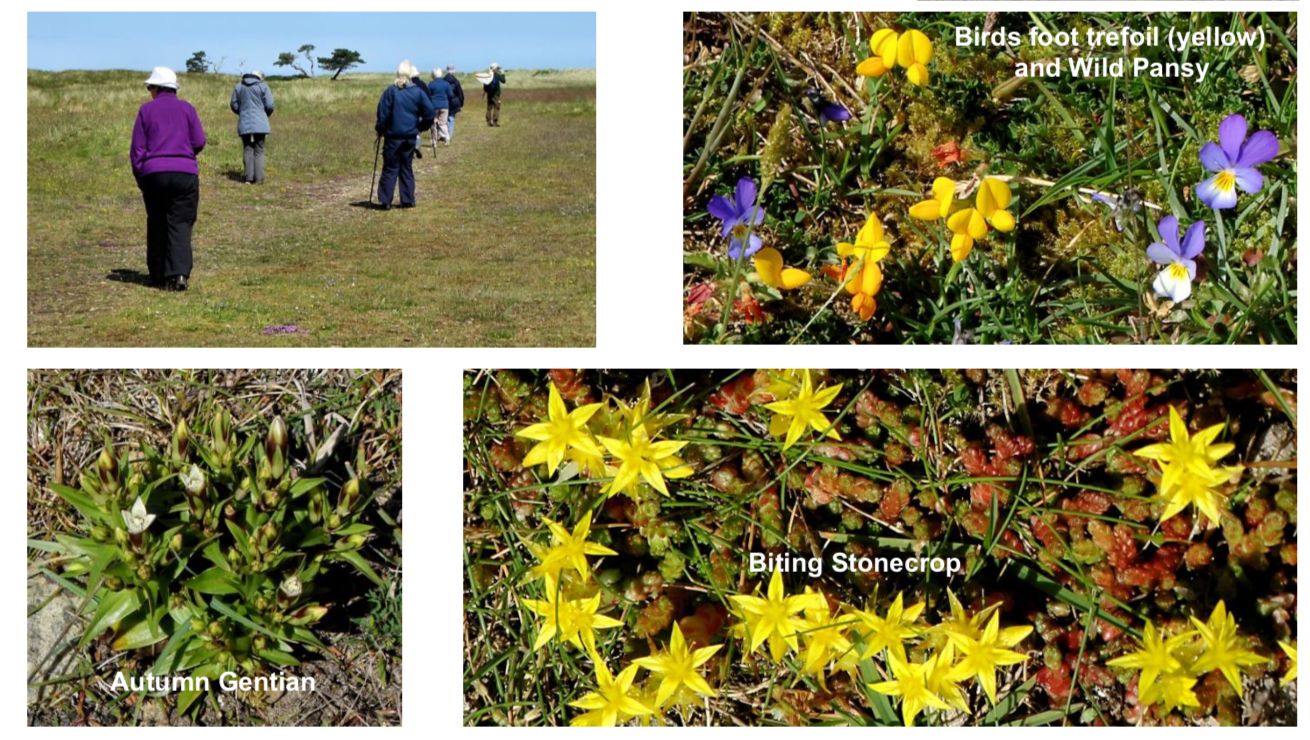 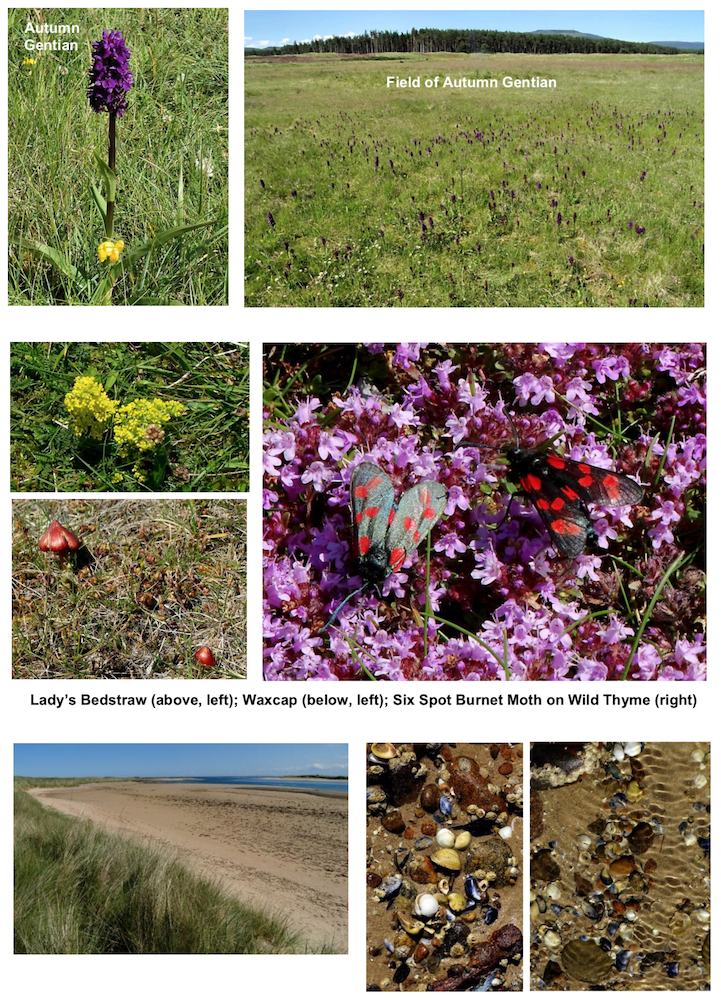 Before returning to Aigas the rangers took us to the southern shores of Loch Fleet where more treasures were revealed, including otters on a sandbank. 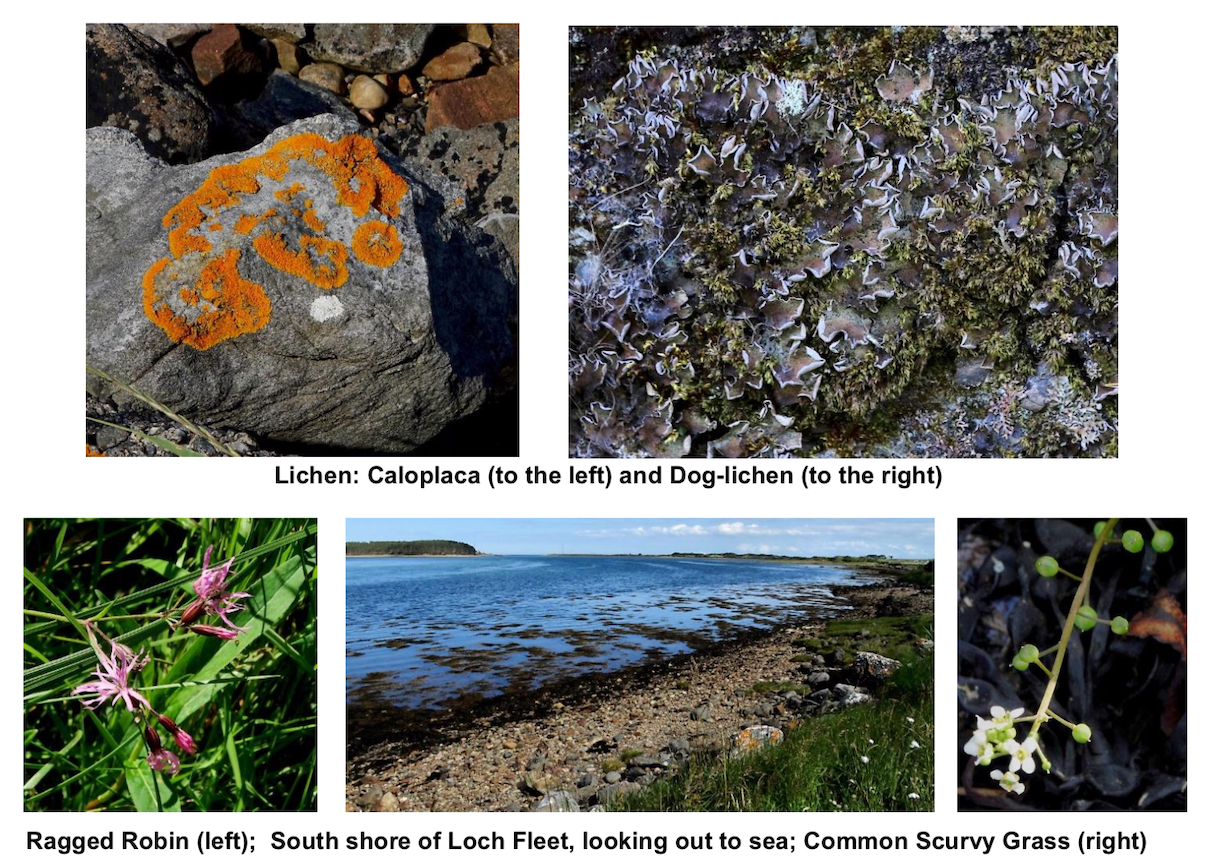 It had been a long interesting day, expertly guided and supported by the rangers, a happy group returning to Aigas.

The theme for the next four days was formal gardens, with us privileged on most to be led by Lady Lucy who introduced us to those responsible for the gardens. Tuesday saw us travel to the west coast, firstly to two gardens in the Little Loch Broom area, Dundonnell House and Durnamuck and then to the National Trust’s Inverewe Gardens beside Loch Ewe. Dundonnell House, on the east bank of Dundonnell River dates back to the mid 18th century, with extensions and alterations in subsequent centuries. A prominent feature of the gardens with their many exciting areas to explore is the 300-year old Yew.

From Dundonnell we travelled to the house and garden at Durnamuck recently established by the current owners. The first aspect that struck us was the house that they created, using stones from the river at Dundonnell house where the owner worked. Beautiful. And then the stunning views to Little Loch Broom, even in the mist and cloud.

We enjoyed our picnic lunch (expertly supplied by Aigas) in the delightful garden, enjoying it and the views to the loch and the mountains beyond. Then a brief stop to explore some wild flowers (lesser butterfly-orchid, below left; and northern marsh orchids) before leaving the area for Inverewe and its magnificent garden on the shores of Loch Ewe.

Inverewe gardens are one of the jewels of the National Trust for Scotland, worth an extended visit as were the other gardens that we visited. We could then relax in the minibus as the two rangers confidently and carefully drove us back to Aigas, stopping for a coffee/tea break on the banks of Loch Maree whilst they told us about the area, its history and geology.

And so on to Wednesday and two gardens in the Highlands to the south. Firstly, Glenkyllachy Garden, about 1200 feet above sea level, in Glen Kyllachy to the west of the A9, north of Aviemore and near the river Findhorn, one of the longest Scottish rivers, which runs through the Glen on towards the Moray Firth. Even in its vast open spaces, the tiny stirrings of new life in the garden are important as the ranger showed us a tadpole. 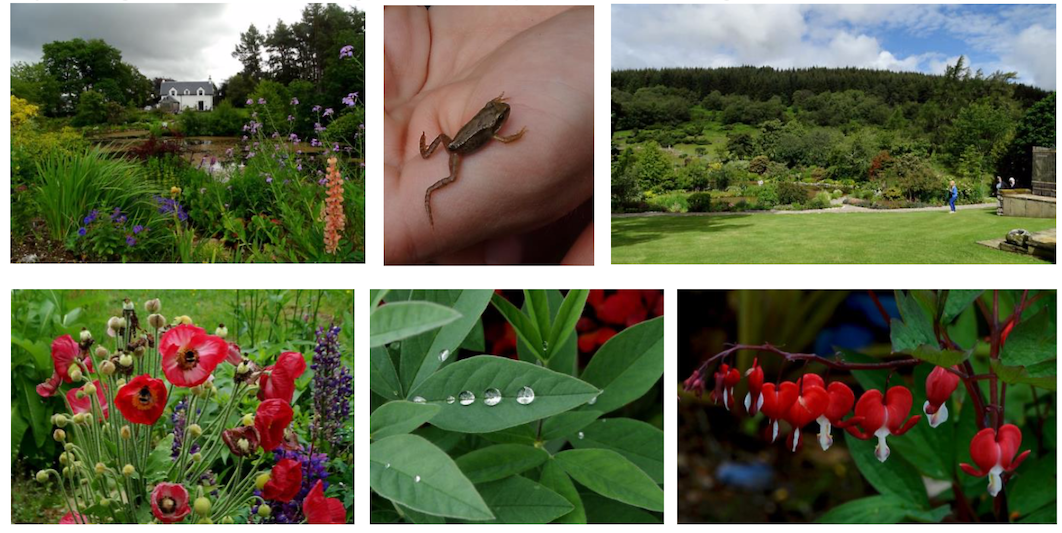 We then crossed the A9 through the northern part of the Cairngorms to Logie House Garden in the Findhorn valley (yes, the same river we had seen in the morning) about 6 miles south of Forres. The house dates back to the 17th

century, with substantial alterations to house and garden subsequently. Within the estate is the Logie Steading, home to several businesses including an exciting 2nd-hand bookstore that I only had minutes to explore. It was overcast with rainy spells for our visit, but the gardens were still worth exploring, colours perhaps more vibrant.

The Inverness to Kyle of Lochalsh is one of Scotland’s well known scenic railway lines, worth travelling for its own sake. I still recall travelling along it in 1980 and a holiday spent in the Lochalsh area. So it was with joy that I learnt that on Thursday we were to travel most of it (from Beauly) to Attadale station, near the Attadale Gardens, our focus. The garden lies to the south-east of Loch Carron with Applecross and other mountains visible across the loch to the east from the railway station. We were met at the station by the owner who led us the short walk to the house where we were greeted with tea / coffee and cakes and a summary of the estate and gardens – yes, a privilege. 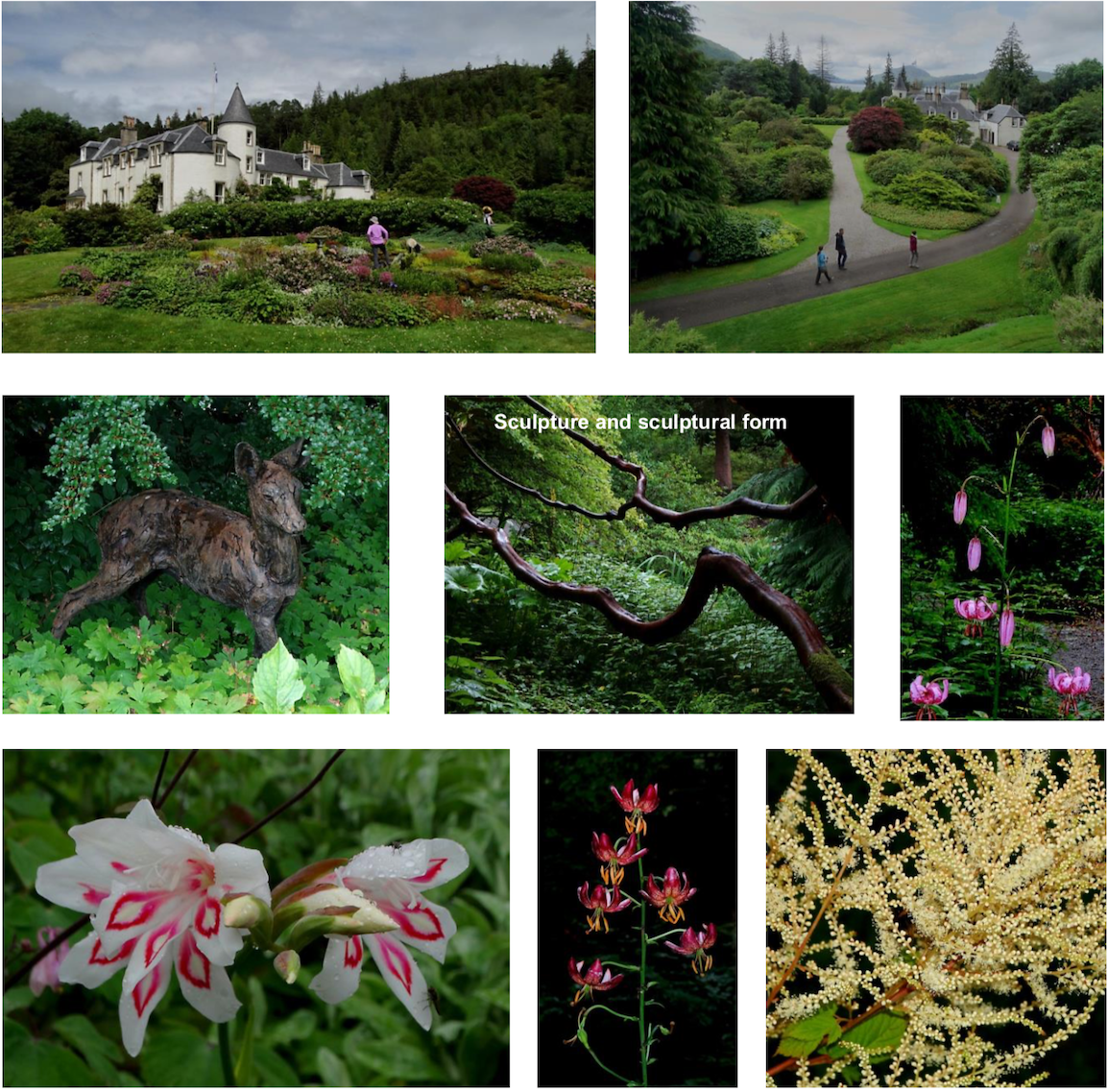 Friday took us to the Black Isle, the peninsula north of Inverness that is neither an Isle (though bounded by substantial firths to north and south) nor is it black – with various explanations given for being called ‘Black’. First visit was to ‘The Lookout’ in Kilmuir, developed from scratch by the current owners on the edge of a hill on the south of the Black Isle, overlooking the Moray Firth to the south. The garden was formed by terraces linked by stone steps, resulting in a large ‘roomy’ growing area sloping down to the house. 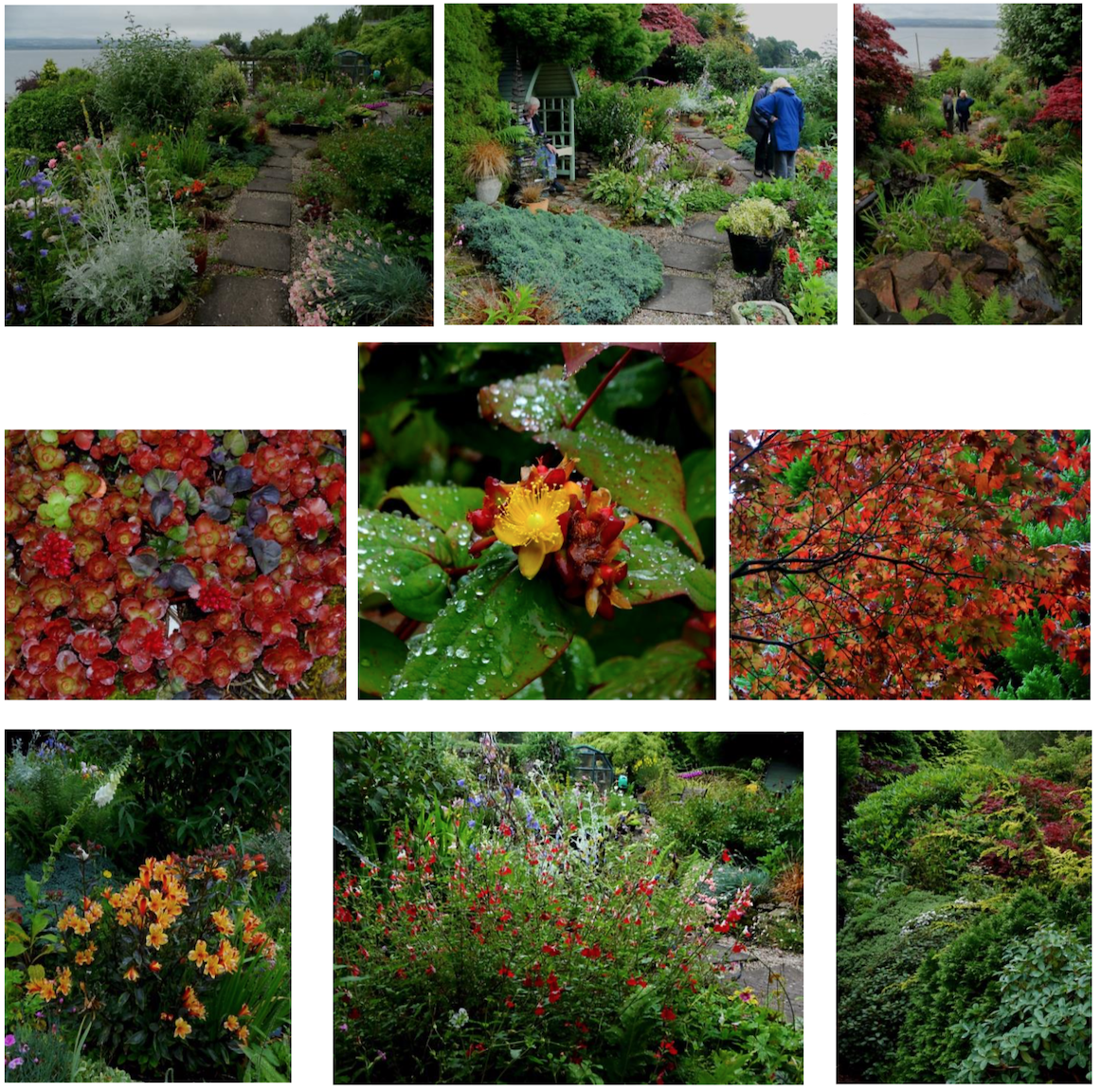 We had our picnic lunch near the ruins of the Red Castle on the Black Isle. The castle had been used by the military during World War II after which it was unoccupied. To avoid crippling taxes, as happened at many rural properties, the roof was removed and nature has gradually started to take over. Whilst there we learnt that pigs have an important role in revitalizing soil, digging it over as they forage.

Our last visit was to Allangrange, first to the Old Allangrange garden and then to the associated Black Isle Brewery where we had the opportunity to buy some real ale – I had already enjoyed it at Aigas and so availed myself of some at the brewery with its slogan: ‘Save the planet, Drink organic’. We were again privileged to be shown the garden by the owner.

The garden, like most, all that we had visited, is arranged in rooms, including fruit and vegetables. It also has a reputation as a garden planted to encourage bees.

On our return to Aigas we had the opportunity to visit the hide where the wild cat breeding programme is taking place, having a glimpse of one of the two newly born kittens. Aigas is taking part in this programme that seeks to preserve the integrity of the Scottish wild cats.

It had been a memorable week, one that we hope to repeat, and I encourage all who have the opportunity to spend some time at Aigas. The programme we went on was expertly and cleverly put together, covering a significant part of the Highlands surrounding Aigas, east, west, north and south. Other programmes were available and we had ample opportunities to meet with those on these programmes, sharing our experiences with unanimous appreciation for the unique experiences we were all having. And the individual care and attention we each received, with Aigas Sharing the Wonders of the Wild Highlands, each guest experiencing Aigas’ ethos that nothing is too much.