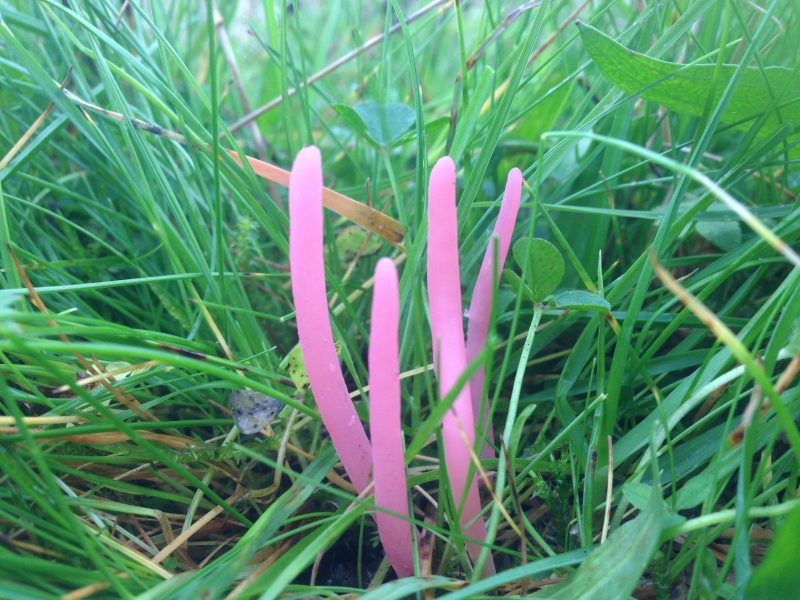 Since starting work here at Aigas I have become quite a fungus fanatic, the mysterious nature of this kingdom of life absolutely fascinates me and I hope to pass this love of all things fungi onto others! Did you know that fungi are classified within their own kingdom? Many people don’t, it is only in relatively recent years that the study of fungi started to be carried out separately from plant science. This is understandable, fungi are mostly found in the same habitats as plants and like plants they do not move. However it is incredibly sad that fungi have been overlooked and understudied for so long, as they are not only fascinating but also crucial to life as we know it.

Despite their close association with the plant kingdom, fungi are actually more closely related to animals than to plants. Like animals they cannot photosynthesise and must obtain their nutrients by digesting other organisms. The digestive enzymes that fungi produce are useful to us humans and other animals in a multitude of ways. Fungi (and a very small number of bacteria) are the only organisms capable of digesting lignin – the substance in the cell walls of vascular plants which gives them strength and rigidity. This makes fungi the Earth’s primary decomposers, they break down the tough cell walls of trees and other plants and allow the nutrients within to be returned to the soil. You may look at that pesky honey fungus in your garden in a new light now!

Probably the most important and overlooked role of fungi is carried out through their association with the roots of 90% of Earth’s plant species. This is an intimate symbiotic relationship known as a mycorrhizal association – ‘myco’ referring to the fungus and ‘rhizzal’ referring to the plant root. In plants that form this relationship a nutrient exchange occurs across the root cortex (the outer root). The fungus gains sugars and carbon and the plant gains vital nutrients such as nitrogen, phosphorous and potassium. Those substances sound familiar don’t they? That’s because nitrogen, phosphorous and potassium are the nutrients found in the inorganic fertiliser NPK, which is used so zealously in agriculture nowadays. As agricultural fields are ploughed so regularly and sprayed with a suite of harmful chemicals, mycorrhizal fungi no longer survive in the soil and artificial fertilisers must be used to fill the role of the fungi. This certainly makes me wonder what would happen to the production of our food crops if NPK was no longer available. A scary thought indeed, as without these vital nutrients most plants are unable to grow.

The list of other important roles of fungi is almost endless – we are reliant on them for the production of many of our antibiotics (e.g. penicillin), immune-suppressants and statins. Most of the structure of a fungus is actually underground, in the form of cobweb-like projections called hyphae which search through the soil in search of food. These hyphae are only one cell wall thick and must defend themselves against the bacteria in the soil which will readily attack them; their method of defence is to secrete an array of enzymes which destroy the attacking bacteria. These enzymes are very useful in modern medicine and lots of pioneering research is being carried out into the potential use of these in treating autoimmune diseases.

Fungi are also at the forefront of the battle against our planet’s  pollution problem. ‘Mushroom packaging’ is now available in the USA, an innovative packaging solution which contains 100% fungal hyphae and can be composted once finished with. Oyster mushrooms have been used for ‘bioremediation’ – using nature’s wisdom to clean up human messes such as oil spills. Amazingly, oyster mushrooms secrete an enzyme which digests the tough hydrocarbon Benzene which is found in petrol and many plastics. The list goes on, fungi can be used to filter water, to give structural integrity to soil and as natural pesticides. The leader in this field of research is Paul Stamets, his work is ground-breaking and inspiring and I would encourage everyone to watch on of his many talks, by the end of the video you will be as fascinated by fungi as I am!