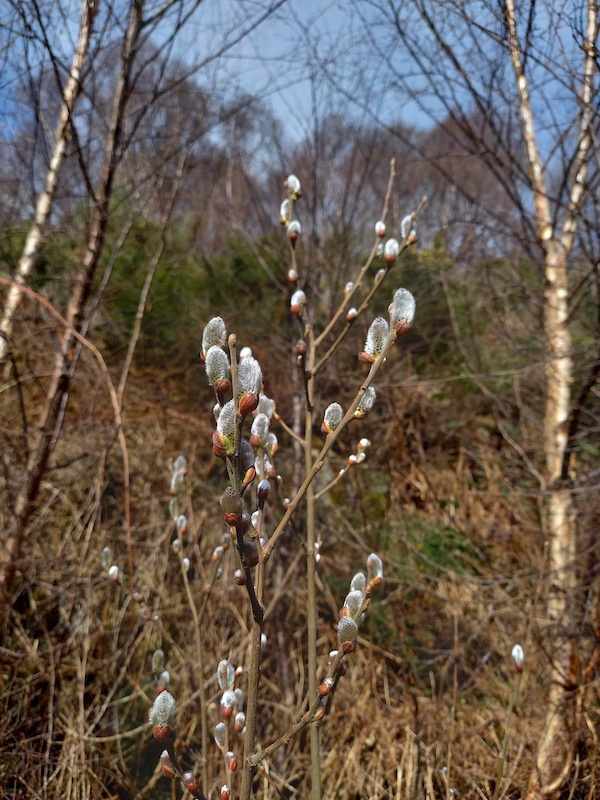 Winter always lingers on late into the year in the Highlands; gladly some preliminary vernal signs have started to make themselves clear over the last week or so. At Riverview we’ve seen the first Lesser Celandines blooming, Sallows freshly blossoming, and heard the bouncing song of a newly returned Chiffchaff echoing around in the treetops. The Chiffchaff was easily spotted, as there are still no leaves on the trees!

There have been some exciting additions to the Riverview bird list since the February update! Emily spotted a brief Golden Eagle cruising over the ridge on the opposite side of the Strath, and Milo has twice seen a Peregrine darting over the craggy woodland behind the house. We’ve also noticed some of the more common species working their way inland again after wintering in milder areas closer to the coast, with our first Rook, Starling and Common Gull sightings of the year.

We’ve also seen 3 new mammals. Brown Rats have been making regular visits in the evenings, pilfering the peanuts left out for our Badgers and Pine Martens! We’ve spotted several herds of Red Deer by scanning the ridgeline opposite and the first Pipistrelle Bats of the year have made an appearance, feeding around the treetops by the house. We have 2 species of Pipistrelle Bat on the Aigas estate: The Common Pipistrelle and Soprano Pipistrelle, the latter named as it echolocates at 10 KHz higher than the Common Pip! The two species are most easily told apart by their echolocation frequency, so we hope to get our bat detector out and figure out which species we’re seeing soon.

On the invertebrate front, we’ve recorded 13 new species since the last update, 12 of which have been moths! We’ve been really surprised by the moth diversity attracted to the windows at Riverview; in all we’ve recorded 19 species this year without a moth trap. We are fortunate that the house is surrounded by mature Birches, Aspens, Willows and Oaks, providing a variety of different niches for the moths to thrive in. A standout highlight came late one evening about a week ago, when a particularly large and fluffy moth settled on the living room window. After leaping into action and grabbing a bug pot, we brought the moth inside, where we realised it was a rare Rannoch Sprawler! This is a Red Data Book species, meaning it is recorded in 15 or fewer 10Km squares nationally, in this case being found only in the Loch Rannoch area, North Cairngorms and central Highlands around Aigas! Its larval foodplant is Birch, but the moth will only be found in areas of ancient Birchwood.

If you’re interested in learning more about the moths of Aigas, check out last year’s mothing summary written by ranger Tay Davies:  https://www.aigas.co.uk/an-aigas-season-in-moths/

As ever, here’s a photo of the updated Riverview species whiteboard. It’s starting to look quite full! 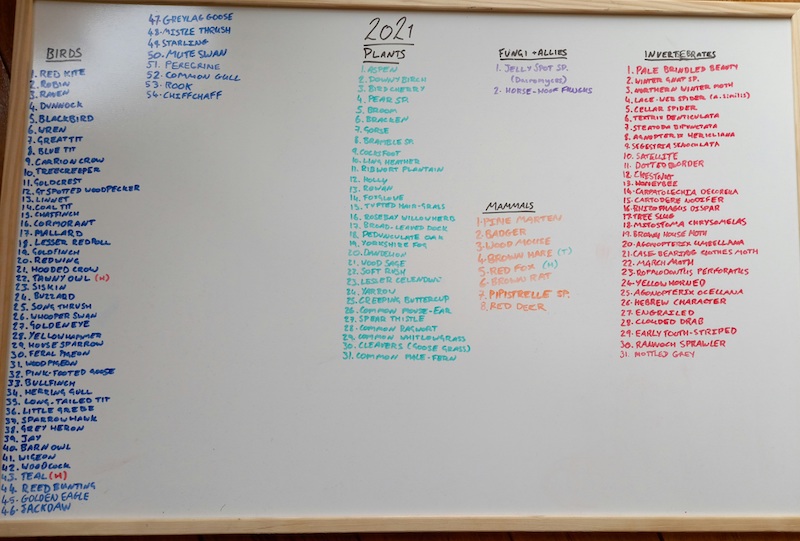